I have been fascinated by Ebola Haemorrhagic Fever since reading ‘The Hot Zone’ by Richard Preston in the mid-1990s.

In recent weeks it has come to light that another outbreak has occurred, this time in the Democratic Republic of the Congo. On the 26th October 2012 the World Health Organisation:

For those of you who are not aware Ebola Haemorrhagic Fever (EHF) is a severe acute viral illness often characterized by the sudden onset of fever, intense weakness, muscle pain, headache and sore throat. This is followed by vomiting, diarrhoea, rash, impaired kidney and liver function, and in some cases, both internal and external bleeding. Laboratory findings show low counts of white blood cells and platelets as well as elevated liver enzymes. People are infectious as long as their blood and secretions contain the virus. Ebola virus was isolated from seminal fluid up to the 61st day after the onset of illness in a laboratory acquired case. The incubation period (interval from infection to onset of symptoms) varies between 2 to 21 days. During EHF outbreaks, the case-fatality rate has varied from outbreak to outbreak between 25% and 90%.

To emphasise the case to mortality rates which are extremely high I have broken down the figures for outbreaks by year. As you can see from Figure 1 there is a higher density of red over green, reflecting the overall 66.5% mortality rate from the three confirmed lethal strains of Ebola Zaire, Sudan and Bundibugyo) plus the one confirmed case of Ebola Ivory Coast. 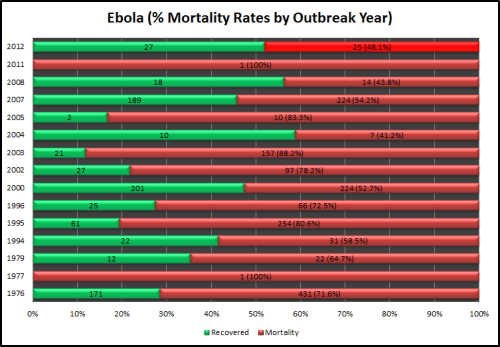 The latest outbreak of Ebola in the DRC reflects the burden that country has in both cases and mortality. The next graph reflects the almost half share of mortality that the DRC experiences of all recorded cases since 1976 but with only 41.8% of actual cases also confirms a higher mortality rate compared to other impacted countries. No doubt this is due to it being the least developed country in the world.

The last graph shows a breakdown of mortality figures by virus strain. There are currently five known variants of Ebola. They are Ebola Zaire, Sudan, Bundibugyo, Ivory Coast and Reston although only the first three variants have been confirmed as being fatal. 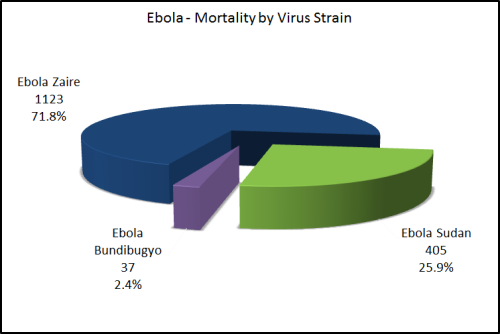 Although Ebola has never caused a confirmed fatality outside of continental Africa the Reston strain has been imported into the United States on a number of occasions (via macaque monkeys in 1989, 1990 and 1996) and Italy once in 1992. Given its very high mortality rate once infected it is one of the scariest of diseases.

There is no treatment or vaccine available so let us only hope that it continues to lay dormant and the current outbreak is contained as soon as possible by the local authorities supported by international agencies such as the World Health Organisation.

Update 1 (3/12/2012): A further outbreak of Ebola has occurred in Uganda, although at the time of this update I was unable to confirm which strain. The WHO announced via an internet update on 30 November that:

“As of 28 November 2012, the Ministry of Health in Uganda reported 7 cases (6 confirmed, 1 probable) with Ebola haemorrhagic fever in Luweero and Kampala districts. Of these cases, 4 died.”

Additionally, I was able to find an unconfirmed report (as it comes from a good news source, the South African Times but not from a primary source, i.e. via a Ministry of Health, WHO or CDC update) that the DRC outbreak which initiated this blog has ended. The Times reports that:

According to revised figures, 62 people are believed to have been infected during the latest epidemic, which was declared in mid-August in the north-eastern Orientale Province and which officially ended on Friday, he said.”