Here is my first response to the latest Australian Bureau of Statistics labour figures as presented via The Hon Bill Shorten MP’s 6 December 2012 press release. In that Minister Shorten stated:

The Minister for Employment and Workplace Relations, Bill Shorten, welcomed today’s stronger than expected employment result, highlighting that 843,800 jobs had been created since the Labor Government came to office five years ago (or around 460 jobs per day), an outstanding achievement, given fragile global growth, record high unemployment in the euro area and ongoing uncertainty around the looming ‘fiscal cliff’ in the United States.

First of all let me congratulate the Gillard government on a long term trend of delivering jobs growth during the worst employment conditions experienced by our northern hemisphere OECD partners. Only today Greece topped 26% official unemployment with youth unemployment breaking through the 56% mark (conditions that have not been present in any European country since the 1930’s).

Although the seasonally adjusted figures were an additional 13,900 jobs added over the past month the trend details show a very impressive story of job additions since the GFC took hold in Australia in late 2008. The most interesting aspect of this graph is the data changes that have occurred since the previous months data. If you’re interested check out a previous post titled ‘Abbott’s Promise’ which utilised the same datasets from October 2012. 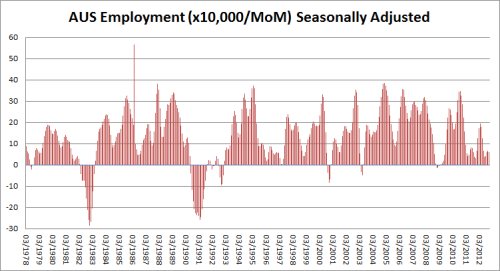 Although our story is much better than other OECD nations, I have serious issues with the one dimensional story put forward by the government. Here are two graphics which detail some of my concerns around the simplistic story of labour statistics as told by the mainstream media.

My first concern was raised in my recent ‘Abbott’s Promise’ blog which discussed the almost doubling of the Australian working population since 1971 (increasing from 8.48-million to last year’s 15.64-million). For the record and given that we are increasing our working population cohort from 2018 to include 66 and 67-year olds my numbers would be larger than others (but I reflect the real world, not the absolute one of some of my colleagues).

Minister Shorten has expressed his employment increases since the commencement of the current Labor government in both an actual (843,900) and a daily average (460) so the next graph represents a look at the working population increase since July 2007 with an actual of 1,201,100 which averages out at a an increase of 240,220 per year or a required increase in job creation requirement of 658 per day. On those figures the current government should have a shortfall of 357,200 or 198 per day!

As put by Greg Jericho in his very excellent monthly labour force blog every wonks favourite statistic is the employment to population ratio as compared to the current participation rate of 65.1%.

The ABS puts this number at 61.7% which would correlate to an Australian population of 18.713-million!

When I started out today I was as surprised as everyone at the stronger than expected labour numbers. At the time I tweeted that the “Participation Rate hides all of our sins”.

At the end of the day I have significant concerns over more than just the participation rate.