When it comes to Economics and Labour, Australia has more in common with countries such as Chile and Russia rather than the US, UK, or the more unfortunate economies of Spain and Greece.

Yet when it comes to political and business dialogue we are constantly swamped with examples of economies that have no resemblance to Australia’s. This is especially noticeable each month as the labour figures are released and anytime a politician or business group discusses the country’s finances.

Examples of this bias can be found in almost every aspect of political dialogue.

Federally, Labor will constantly compare any economic or labour data update against developed world. Most developed countries are service based or declining manufacturing based economies. Of the developed economies only Australia and Iceland have a greater than 40% mineral export exposure (using 2010 data). Although similar to Australia in many respects the next country in that group with high exposure to mineral exports is Canada with just a 11.9% exposure to the minerals sector.

The Liberal opposition will constantly emphasise saving economies such as Norway who consistently run budget surpluses. At the same time they won’t mention Norway’s prosperous welfare state including high levels of state ownership and high public service employment levels. In his most recent speech Tony Abbott was happy to disregard the bulk of the Global Financial Crisis, except where he could talk up the growth and prosperity of Australia which as he stated ‘happened for the last five or six years of the Howard Government’. Just to jog your memory this was the period 2002-2007, the crescendo of the pre-GFC boom times and mineral exports.

Business is not immune. One of Australia’s most prominent mineral exporters, Gina Rinehart recently stated “warned Australia risks becoming another ‘Greece, Spain or Portugal’ unless it cuts government debt and lifts its competitiveness”.

If you want to understand the Australian economy in a global context you are better served by looking at OECD level (or like) countries that are predominately commodity exporters (specifically minerals).

To that end I have listed five core countries plus Australia which I believe are better indicators of the Australian economy. They are Chile, Russia (non OECD), Canada and Sweden. I have also included the limited minerals exporter Norway (it is actually a prominent oil/LNG producer but a good comparison country all the same).

Table 1: Similar countries to Australia (ranked according to ICMM contribution)

While unemployment is constantly compared by Federal Labor against the developed world the Liberal opposition tends to avoid direct comparisons. The reason for the difference is that Australia’s official unemployment has been very strong, even amongst other commodity producers. Here are two different views of the global unemployment rates, the first showing the six core mineral producers over the past decade (Figure 1) and to show how bad it could have gone a comparison of my best three mineral exporters by unemployment rate against Greece and Spain (Figure 2).

Both sides of the political divide and almost all business sectors talk about increased productivity, yet when we talk about participation rates we don’t discuss similar commodity economies but emphasise disparities with the US, UK, Japan or Germany (outside of academia or relevant government departments of course). If we look at similar economies data we still better than a fast closing Chile but are under-par Canada by 1-2% and around 12-14% under the long-term average of European competitors. Here is a look at how Australia compares against similar mineral exporting economies. 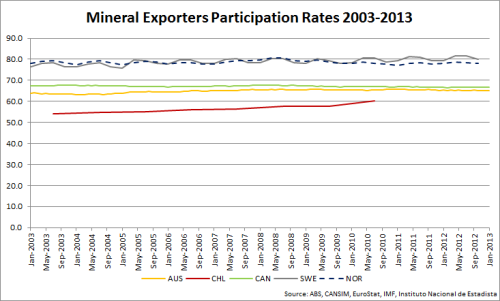 For a country that has done so well out of the Global Financial Crisis (in GDP terms at least) you don’t see that reflected in the political discussion or business surveys. Nor do you see it in the Balance of Payments data. Even with a positive once in a generation Terms-of-Trade position Australian has still outspent it’s earnings by a considerable factor. In fact, Australia has not been able to manage a positive Balance-of-Payment number since 1972-1973!

Another fact that is often not discussed is that, unlike Norway Australia is a debtor nation (that is, it spends more than it earns). To emphasise this point let’s look at how Australia compares against Norway (a commodity saving economy) and the USA (a debtor nation). Australia, in my view, does not compare favourably with the USA. 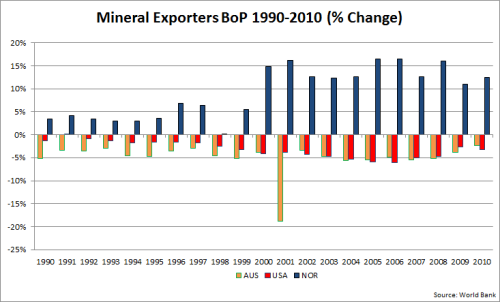 A lot of emphasis is made of the government debt positions, especially by the Liberal opposition and business. Yet, in Australia government debt is low in comparison to globally developed nations and even in relation to other commodity exporters. What is not talked about by both sides is the level of private indebtedness. In 2011 the Australia government was approximately 14% in debt (provisional) yet the private sector (mainly via housing and commercial debt) was 181.1%. Here is a look at the mineral exporter’s data plus Spain and Greece. A good word for Greece too, they were the only country represented in this graph with lesser private than government debt.

Figure 6: Mineral Exporters: Public & Private Debt (as a % of GDP)

Ruslan Kogan, CEO of Kogan, stated on a recent Q&A that ‘97.4% of people make up the own statistics’. In some respects he is right; many people make up facts to suit a purpose. The intent of this article is not to suggest that politicians or high-level business people make up facts. Rather they generally emphasise certain data and disregard other information which does not support their argument.

You will always gain more insight and a better understanding on the Australian economy if you concentrate on parallel economies, such as commodity (specifically mineral exporters) over manufacturing or service based economies.

What I am also suggesting, if you want to understand the Australian economy you are better served by looking a little harder at the arguments and the data presented.

Note: This is a feature article I wrote for the Australian Mining which was published on the 11 March 2013.

2 Comments to “Random Analytics: Mining the Economic and Labour Data”