On the 15th March 2013, the (then) Minister for Resources, Energy and Tourism, Martin Ferguson announced the first tranche of Tourism Industry Regional Funds (TIRF) grants. The 65 successful applicants will receive approximately $13.1 million in direct funding from the Department as part of $48.5 million worth of total funding in support of the Tourism 2020 goals. As the Department Fact Sheet states:

Grants from $50,000 – $250,000 (GST exclusive) will be offered on a matched dollar-for-dollar funding basis for projects which improve or refurbish existing products or services or offer innovative new experiences. Eligible projects must be located in regions outside the Sydney, Melbourne and Brisbane Tourism Regions as defined by the Australian Bureau of Statistics.

With such a dispersed amount of funding across the nation and with more in the pipeline available to the new Minister, Gary Grey potentially prior to the upcoming 14th September federal election I thought it might be useful to complete some analysis of the programme.

When I completed the Regional Development Australia Funds (RDAF) grants analysis last year I was able to provide a graphic on applications received against those accepted from its Department releases. From the reference number coding I can assume that more than 667 applications were receipted and Bulletpoint, a grants consultancy business quoted 763 applications were received as part of their TIRF overview. Either way a low amount of applications were ultimately accepted, somewhere between 8.5 – 9.7%.

I did approach the Department of Resources, Energy and Tourism in relation to a detailed breakdown of funding in comparison to project costs (which they state was worth $141-million) I received this response:

Thank you for your email, in regards to your below question the only information that we publish on the successful applicants is on our website which you have included a link for.  Unfortunately we cannot provide a cost breakdown on the value of the grant against the total value of each project.

Given that response, (two working days later) I felt a second follow-up request for applications data would be a waste of time.

The first infographic is a breakdown of TIRF grants by each state or territory.

Consider this though, Sydney, Melbourne and Brisbane tourism operators were not allowed to bid for grants. If you then remove the population of greater Sydney (4.3-million), the regional population of NSW is still 2.5-million, larger than the total population of Western Australia (2.2-million) and South Australia (1.6-million).

From the Village to the Metropolis

One township, Winiam, didn’t even qualify for an ABS entry. After speaking to the Hindmarsh Shire Council Community Officer (Katherine Colbert) I found out that the village was now considered a district where approximately 50 residents still lived, enough to support a local cricket and pool team only!

Why do Capital Cities get Regional Funding?

Even though regional centres attracted around 75% of the funding, cities (that is any population centre above 30,000) still received approximately a quarter of the grants. What is worse that even with the following Department exclusion “Eligible projects must be located in regions outside the Sydney, Melbourne and Brisbane Tourism Regions as defined by the Australian Bureau of Statistics” Australian capital cities still qualified for 10.9% ($1,432,011) of the funding.

With one of the projects was located in Western Perth, not far from its CBD in one of the few booming cities in the Western world you have to ask the question.

With such obvious economies and global advantage why do Capital Cities still get Regional Funding? 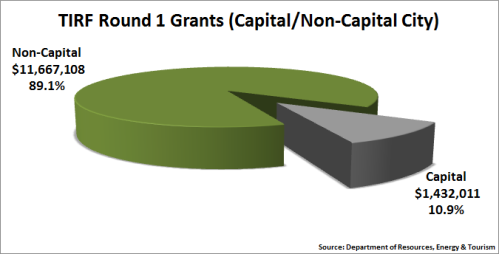 No Evidence of Pork Barrelling

Here is a look at the allocation of grants by political party.

As you can see, the funds do not favour the incumbent Labor government but rather the bulk of the grants go to Coalition held seats (58.3%), followed by Labor (38.7%) and the Independents (3%).

It should be noted, given they won a project with a value of $200,000 that I classified the federal electorate of Dobell as Labor, even though Craig Thompson sits with the Independents currently.

Only a Slightly Marginal Emphasis

One of the key criticism’s I hear often is that there is always an incumbent preference toward marginal seats.

Firstly, with only $2,560,113 (19.6%) allocated to marginal seats there is a barely 20-cents in the dollar going to this area. With more than 80% going to fairly safe and safe electorates any criticism of marginal seat emphasis is quashed.

Secondly, a 7 to 4 ratio and an additional $634,513 there is a higher amount of Labor held marginal seats allocated funding over Coalition and although this should be noted.

So only a marginal emphasis by Labor to Labor held marginal seats.

The next graph shows funding by each electorate.

Wakefield (ALP), Durack (LP) and Indi (LP) topped the list with four projects apiece while Fadden (LNQ) came last with just one project and a value of $50,000.

Probably worth noting but in the first two rounds of RDAF funding both Durack ($42.3-million) and Grey ($24.2-million) were the two most funded electorates and have both done well out of the first round of TIRF grants. 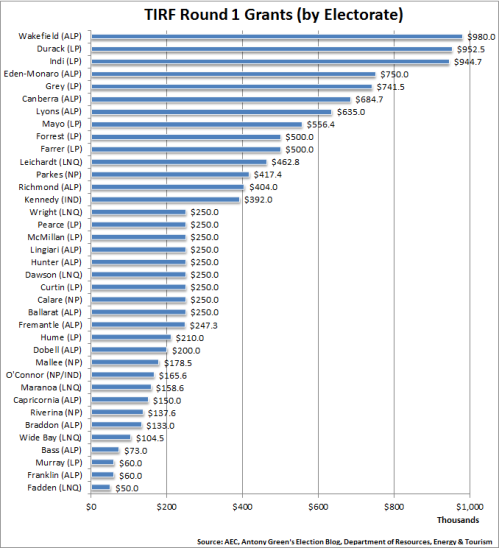 Last graph is a look at the funding allocation per region as defined by Regional Development Australia.

Hume (4), Tasmania (7) and the Far North Queensland & Torres Strait (5) regions received the most projects and funding while the Gold Coast (1) received the least.

Sydney, Melbourne and Brisbane were not allowed to receive funding, thus a further 20 regions missed out on this round. 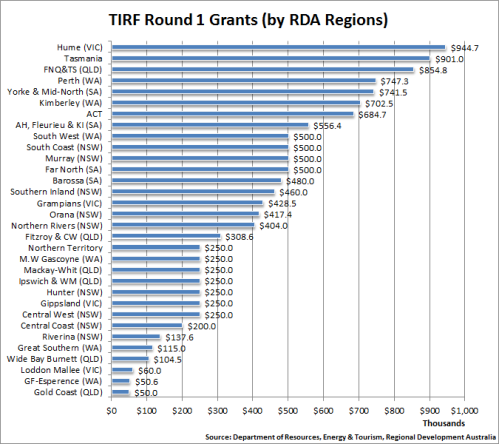 Although any funding is valuable, especially when directed at Small to Medium Enterprises my first thoughts are that the $48.5-million is not enough to help such a trade exposed sector.

Looking at the Australian Bureau of Statistics data the 2010/2011 Tourism Gross Domestic Product (TGDP) of the sector was $34,595-million and it employed around 513,000 Australians.

In comparison, the car industry receives billions in government support (i.e. the Automotive Transportation Scheme) while only directly employs approximately 60,000 Australian’s. Only last week Holden announced a further loss of 500-jobs even after it has received $1.8-billion in government support over the past decade.

So, with just $13.1-million in funding (just 0.037% of the TGDP) the answer would be that outside of those businesses which have received funding the grants will not assist the tourism sector all that much, especially when other sectors receive billions and still atrophy.

At least with this regional funding initiative most of the money went to regional area’s and for that the Department should be given credit.

Note: Thank-you to Susan Bruce (Poacher’s Pantry) who explained why the business is in NSW but the town of Hall is located in the ACT and to Katherine Colbert (Hindmarsh Shire Council) who was able to give me the background on the former town of Winiam when the ABS could not.

Update 1 (15/04/2013) I updated the Applications Received section with the Bulletpoint company’s applications figure of 763 and added a hyperlink to their TIRF details page.