***** Please note that this post reflects data, graphs and infographics of the Avian Influenza A(H7N9) virus situation in China and was updated with available information between 17th April through to the early morning of 22 April 2013 (CET) *****

Before I commence it should be noted that avian influenza A(H7N9) is not the Spanish Flu which spread to one in every four persons on Earth and killed between 2.5 – 5% of the world’s population.

Currently, due to the low amount of cases and its lack of country-to-country movement it is not even comparable to the SARS breakout which had a case fatality rate weighted in the hundreds, reached dozens of countries and had a significant global economic impact measured in the tens of billions of dollars.

Although it is an emergent flu virus, it is now a confirmed killer being actively tracked by several organisations including the China Health and Family Planning Commission and the World Health Organisation (WHO).

All diseases have both health and economic impacts and it is worthwhile keeping a weather eye on those being followed by global health organisations.

These recent reports from China are the first cases of human infection with H7N9 viruses.

The main clinical feature among most patients is respiratory diseases resulting in severe pneumonia. Symptoms include fever, cough and shortness of breath. Patients have required intensive care and mechanical ventilation. Information is, however, still limited about the full spectrum of disease that this infection might cause.

It should be noted that from mid-April the WHO was starting to see some “relatively mild cases of illness” and that “it is possible that there are other such cases that have not been identified and reported.” The Chinese Health and Family Planning Commission also announced that it would reimburse rural H7N9 sufferers via a Rural Cooperative Medical System, hopefully alleviating any direct costs of treatment at the same time increasing both data capture and knowledge of the disease.

Here are some analytics of the avian influenza A(H7N9) virus outbreak.

What would most concern the relevant authorities is the very high case fatality rate in the first weeks and months of the outbreak.

Currently there are 102 laboratory confirmed cases including 20 confirmed fatalities, a mortality rate of 19.6%. For context SARS was 10.9%.

9 persons (8.8%) are known to have recovered and have been discharged from hospital or treatment.

The most recent fatality via Xinhua was on the 21st April.

Here is an infographic looking at those hospitalised, confirmed fatalities and patients that have had confirmed recoveries. At the suggestion of @vanebobadilla I’ve also included breakdowns by sex using the most current available data (see embedded notes for details). 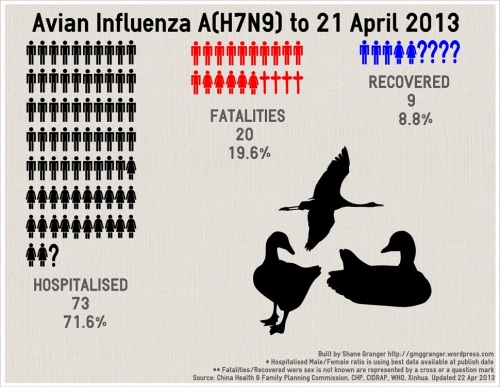 Using public sourced data here is a look at the epidemiological curve of cases where I have a confirmed onset of illness date. If I can then verify the subject has died or recovered I have coloured them accordingly. WHO issue a similar report on a weekly basis. Currently I have been able to verify the illness onset dates of 91-patients which have been included in the following graph. (Note: Where a range of dates for onset of avian influenza A(H7N9) have been used I have input the earliest date).

Now a look at the 102-cases by Municipality (Beijing/Shanghai) or Province.

At this stage the bulk of the official reported cases have been in the Zhejiang Province (37.3%) which overtook the Shanghai Municipality (33.3%) for number of cases on 21 April 2013. At a regional level the cases are almost entirely confined within the East China Region (96.1%), represented by the blue section in the infographic.

Outside of the East China only Henan and Beijing have recorded instances of H7N9.

In Beijing a seven year old girl became ill with the respiratory disease on the 11th April 2013, presented to a hospital two days later and was released from Beijing Ditan Hospital on the 17th April having fully recovered.

On the 14th April the first asymptomatic case was recorded with a 4-year old Beijing boy being tested positive as part of a high-risk surveillance group.

The most recent case outside of East China was recorded on the 18th April in Henan Province, South Central China. 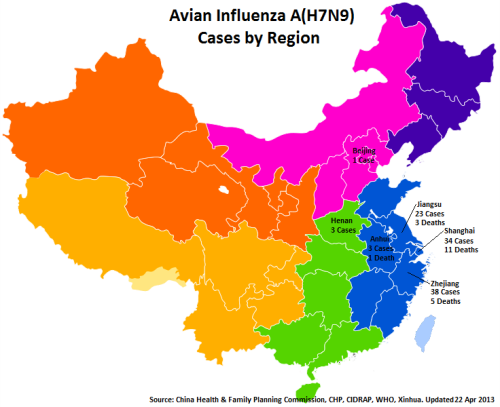 Here is a look at those presenting with avian influenza A(H7N9) by their age cohort.

Of the official 98-cases where age data is known the average age was 59.3-years and 45.9% of the patients were aged 65 or greater. Only four cases were under the age of 24, three children all under the age of 10 and a 21-year old female from Jiangsu. This does not include the 4-year old asymptomatic case in Beijing reported in mid-April.

One of the explanations of the high mortality rate might be the high average age of those presenting to medical facilities.

Of the official 16-cases where death has been officially confirmed and verified the average age was 61.3-years and 43.8% of the deaths were recorded in those over the age of 65.

19/04/2013: I had an interesting discussion via Twitter with Jason Tetro (aka The Germ Guy). I’m a data specialist so needed to do some ancillary reading in relation to his input but Jason raised the subject that the H7N9 might cause a cytokine storm, effectively an uncontrolled immunity feedback loop. I’ve included links to both Jason’s blog and the relevant Wikipedia page.

The avian influenza A(H7N9) virus is a new and as yet relatively unknown disease.

Before I close it might be worthwhile to look at a recent and quite lethal respiratory disease outbreak, the H7N9 virus, commonly known as SARS.

The Severe Acute Respiratory Syndrome coronavirus (SARS-CoV) was a viral respiratory disease, which initially struck China but eventually impacted up to 37 countries between November 2002 and July 2003. From the onset of the disease the World Health Organisation (WHO) confirmed that it infected 8,096 people including 774 fatalities, a mortality rate of 9.6%.

According to the WHO in its 49th update of the SARS virus (7 May 2003) “the likelihood of dying from SARS in a given area has been shown to depend on the profile of the cases, including the age group most affected and the presence of underlying disease. Based on data received by WHO to date, the case fatality ratio is estimated to be less than 1% in persons aged 24 years or younger, 6% in persons aged 25 to 44 years, 15% in persons aged 45 to 64 years, and greater than 50% in persons aged 65 years and older.”

From an economic viewpoint the Asian Development Bank did some modelling during the tail-end of the outbreak and stated that the disease would cause around $12.3 billion in lost Gross Domestic Product in its first quarter, ramping up to $28.4 billion in a second consecutive quarter for East and South East Asia alone. This was mainly due to losses in import demand (air travel, entertainment, retail, tourism and transportation) and confidence. The total global cost of the SARS was estimated to be between $40 and $50-billion.

Given both the health and economic risks associated with any disease outbreaks, especially those coming out of the Middle Kingdom, I will be closely monitoring the developments of this new respiratory disease and updating this post regularly as more data comes to hand.