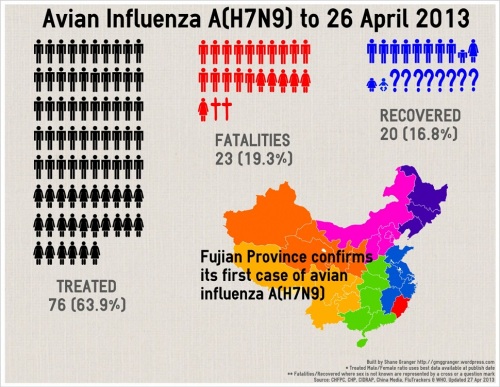 In the past 24-hours there has been confirmation of 7 new cases and one fatality. This brings the total for China to 118-cases including 23-deaths and Taiwan to 1-case without a fatality. (It should be noted that I do not include the asymptomatic Beijing case in my count).

Although there were no confirmed discharges in the past 24-hours, six patients from Zhejiang will be released tomorrow. That would take the confirmed recoveries to 20 (16.8%). Note: All known paediatrics and children have recovered.

The most recent fatality reported was on the 26th April 2013 via Jiangsu Health (in Chinese). 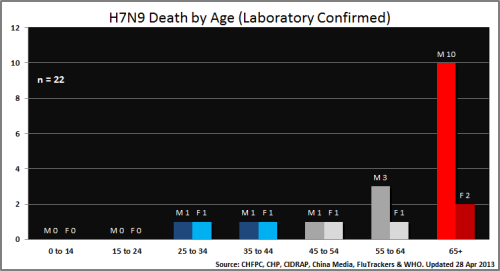 Chinese media today reported the death of one of the earliest victims, a 32-year old woman from Jiangsu and confirmed the death 76-year old farmer from Zhejiang.

Of the 22-cases where death has been verified the average age was 64-years and 54.5% of the deaths were recorded in those over the age of 65. It should be noted that two deaths cannot be verified at this stage.

At the other end of the age spectrum the oldest person to die at this stage was the first known victim, an 87-year old retiree from Shanghai who became ill on the 19th April and passed away on the 4th March. As an aside, his two younger sons (aged 69 and 55) also became ill around the same time. The younger one also succumbed to the disease while the older one has recovered. This could then be the first family cluster (although I leave it to those more knowledgeable to discuss).

Fujian is the 10th municipality or region to have a confirmed case. Although the case count is very low the spread of this respiratory disease must be concerning, especially given that the victims cover a landmass of more than a million square kilometres and house a population in excess of half a billion people.