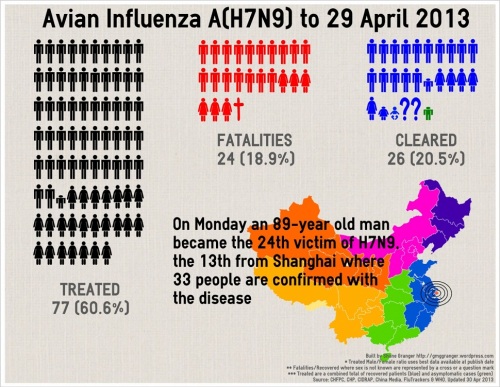 In the past 24-hours of reporting there have been no new cases but one new fatality. This brings the total for China to 126-cases including 24-deaths and Taiwan to 1-case without loss of life. (It should be noted that I from today I will be including asymptomatic cases, including that of a 4-year old Beijing boy which was confirmed in April. Asymptomatic cases will be represented by green figures).

Interestingly, the very late reports of the Fujian and Shandong cases from yesterday are being repeated today, thus some are discussing two new cases. Thanks so much to Crawford Kilian (@crof) for his constant updates.

I was able to update my database today against provincial hospital announcements and have increased my known discharges by 5. This includes the most recent discharge, as reported by Xinhua, from Henan reported today. This brings the current count of recoveries to 25 (19.8%) and asymptomatic cases to one (0.8%).

The most recent reported fatality was on the 29th April 2013 via Channel News Asia.

When I saw that the total recovered had moved ahead of the total fatalities, I thought that in itself might make a good graph, however I have noticed a pickup in discharge announcements recently so I wanted to have a look that in a bit more detail. When I cut the data in half, that is had a look at the first 63 symptomatic cases against the following 63-cases, I found two interesting data points.

The first point is around fatality figures. For the first half 28.6% of cases have been fatal, while for the second half its currently 9.5%. Although this is interesting there is a strong possibility that these percentiles will increase as more data comes in. This brings me to my second interesting data-point.

The trajectory of discharges against deaths is increasing as we see improvements in response to the H7N9 outbreak. To be more specific, to reach 12 discharges (or 19.7% of 63) it took 18-deaths for the first 50% but only six for the last 50%.

I know it’s a bit early to make too much of this split but hopefully it means we are moving in the right direction against H7N9.

Note: My previous post on this can be found at Random Analytics: H7N9 Infographic (to 28 Apr 2013)