Between 12 – 16 May there have been no new reported cases of H7N9 and a drip feed of case and fatality details. To date the totals for China are 131-cases including 36-deaths and Taiwan 1-case without loss of life. Two deaths were confirmed on 13 May without details and the first confirmed fatality from Hunan was reported on 15 May. Note that all totals include asymptomatic cases.

To date 27.3% of all known cases have been fatal, or more than one in every four afflicted by H7N9. For context the Case Fatality Rate of SARS was 10.9%.

The Ministry of Health and Chinese media confirmed that to 15 May there have been 61 patient discharges (46.2%). Asymptomatic cases remain at one (0.8%).

The most recent fatality (with details) reported by the Chinese media was on the 15th May 2013 via Xinhua. 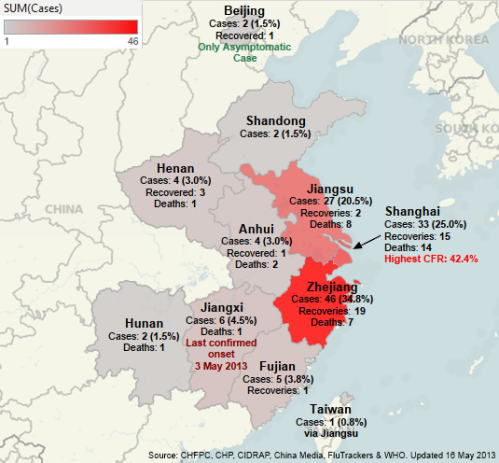 Cases by Region (including Taiwan)

Along with a decline in cases there has been a drip-feed of case details that have flowed through during the week. Note: I have two confirmed deaths that I cannot add as the province has not been disclosed.

The last confirmed onset that I could see has moved from Fujian to Jiangxi and it’s more than a week old in the regional extremities of the outbreak. Shanghai, the region which hosted the outbreak in mid-April announced during the week that it had not had a confirmed case in more than 20-days and was in the process of dismantling its emergency level response to H7N9.

Here is another look at the cases by employment.

To tenuously back the avian link the next largest job title was ‘Farmer’ with 26 confirmed at 19.7% of all cases. If you include those job-titles with linkages to farming, poultry production and food preparation that number would increase to 38 making it the most dominant employment type at 28.8%.

Of the 31 unknown job titles, 12 (9.1%) are represented by people over the age of 65, thus would predominately fall into the ‘Retired’ or ‘Farming’ employment types depending on whether they are rural or urban based.