Prior to my analysing the upcoming Regional Priorities Round I felt it might be worthwhile looking at how the first three rounds and the $2.064-billion Education Investment Fund were distributed. Here is the official overview as per the Department of Industry, Innovation, Climate Change, Science, Research and Tertiary Education:

The Education Investment Fund (EIF) was announced in the 2008-09 Budget and is a major component of the Government’s Education Revolution. The role of the EIF is to build a modern, productive, internationally competitive Australian economy by supporting world-leading, strategically-focused infrastructure investments that will transform Australian tertiary education and research.

The EIF will provide funding for projects that create or develop significant infrastructure in higher education institutions, research institutions and vocational education and training providers, in order to:

The EIF is one of three Nation-building funds established by the Government, along with the Building Australia Fund and the Health and Hospitals Fund.

Here is my analysis. 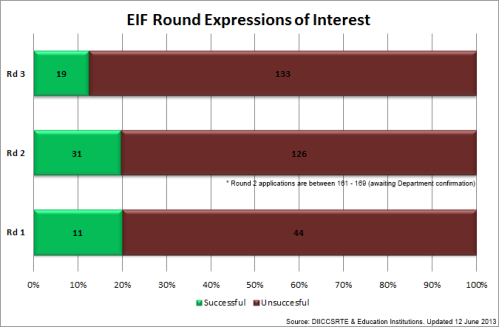 Here are the Application Success Rate (ASR) breakdowns by Round. 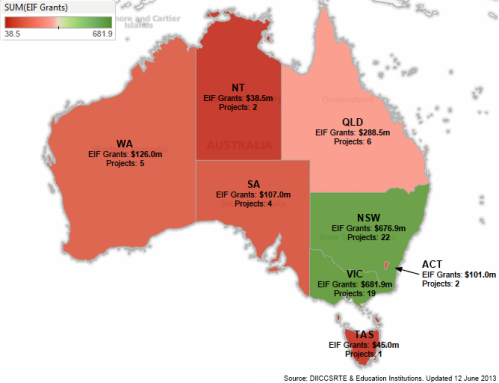 Of the EIF through to Round 3 the weight of grants were presented to NSW (22) and Victoria (19) representing more than two thirds of the total project allocation. The final third was shared between Queensland (6), WA (5), SA (4), NT (2) and Tasmania with one project.

The key point here is that NSW and Victoria received two out of every three dollars on offer, an overly generous proportion of available funding given the diversity and depth of both Higher Education and VET institutions spread across Australia.

Looking at the allocation of funding by institution there were 36 educational organisations from both the Higher Education and Vocational Education & Training (VET) sectors which received funding. Note: In my analysis I included university business units under the parent university and TAFE units by state.

Although the projects that the University of Melbourne won were top shelf and it is the top rated institution in Australia (37th according to UniversityWorldRankings.com) prior to the 2010 election it was also located in the seat of Melbourne, held by the former Minister for Finance and Deregulation, Lindsay Tanner. In fact, of the top ten institutions represented in the graphic above only one project from the 22 which were included was in a seat held by any party other than the ALP. The project in question, allocated in Round 1 was the Gateway @ COFA grant, located in the Division of Wentworth and represented by the then recently dumped Coalition opposition leader, Malcolm Turnbull.

The largest VET recipient of funding was TAFE VIC which received four separate grants across the State with a total value of 52.95-million.

At Number 9 it was good to see QUT, my old Alumnus, represented in the top-10 universities funded.

This chart breaks down the funding by the size of the population centre and capital/non-capital city deployment. Population size is based upon Australian Bureau of Statistics Census 2011 data and then allocated to one of into four categories. The categories are:

As shown those cities with a population greater than 500,000 received the bulk of grants (40) and funding (71%). If we just looked at Melbourne and Sydney they would still receive almost half of all the funding on offer with 27-projects and 1.005-billion in funding.

Given the concentration of universities within our capital cities it is not surprising to find that 45-progrects worth $1.651-billion (80%) went to capital cities.

With just 326 souls at the last census the smallest population size that received funding ($5.5-million) was the NSW regional town of Tocal.

With more than four out of every five dollars going to areas which were Labor during the Rudd/Gillard years the biggest winners from the EIF Rounds 1 to 3 were those institutions located in ALP held seats.

The next chart looks at funding by 2-party preference (the Australian Electoral Commission states that Divisions with a 2-party preferred (2PP) percentile of 60% or greater are safe, those between 56 – 60% are fairly safe and those between 50 – 56% are marginal. Where a seat is considered marginal (based on 2007 election results) I have split into Labor and Coalition seats.

From the 61 projects allocated during the Rudd/Gillard term 28 were considered safe and 18 were fairly safe. There were 15 grants and $430.5-million (19.8%) in funding that were directed to marginal electorates.

Although the split between Labor (7) and Liberal (8) was quite equal the marginal representation percentile for each side was as lopsided as the allocation of funds across parties. For Labor the $200.4-million dollars directed at marginal seats equated to 11.9% of all the funding it received while the conservatives received $230.2-million in marginal seat allocation, a thumping 61% of its total allocation.

The last chart looks at the top 10 electorates by funding allocation.

No surprise here with eight of the ten being Labor held seats. What is interesting is that of the top four electorates given funding Melbourne was lost to the Greens and Brisbane was lost to the Liberal National Queensland Party.

Down the list at 25th the best allocated National Party electorate was Riverina with one project and $34-million in funding.

Sometimes as you complete background research your findings during the exploratory phase can be as interesting and as the story you hope to tell.

In the case of the EIF during the previous parliamentary period that was certainly the case.

There is no doubt that every dollar spent on education, no matter where it is spent, adds value to the human capital stocks of the country, has a multiplier effect across multiple indicators and improves individuals, businesses and organisations.

Saying that I cannot comprehend why the value of academia in New South Wales or Victoria was considered that much more valuable than the rest of the Commonwealth, so much so it attracted 67-cents out of every dollar invested. Was Queensland only worth 14-cents and Western Australia a miserly 6-cent portion?

Then there is the greater allocation of funding to Labor held seats.

When I first published this article I felt that analysis demonstrated a level of emphasis of Labor held seats over those of the Coalition which bordered on ‘pork-barrelling’. As the EIF Rounds 1 – 3 were allocated funding during the Rudd/Gillard term which had a stronger ALP 2-party preferred vote and a higher concentration of inner city seats which is anecdotally also where most Australian universities are situated any statement of ‘pork-barrelling’ must be presented with stronger evidence.

Upon personal reflection and as a result of an independent review via a senior editor at an Australian broadsheet I don’t think that I have, as yet, presented a convincing case that either proves or disproves any pork barrelling.

Declaration of Interest: I have utilised only publically sourced information and all analysis and views expressed are my own and do not reflect that of any employer or organisation that I am associated with.