There is another series of RDAF funding via Round 5B which will allocate a further $200-million in funding available until 30 June 2018 (for which I’ll complete a separate round of analytics).

In regard to RDAF Round 5 the Department of Regional Australia, Local Government, Arts and Sport website stated:

On Wednesday 19 June 2013 the Minister for Regional Development and Local Government, the Hon Anthony Albanese MP, announced that applications for Round Five of the Regional Development Australia Fund (RDAF) open on Friday 21 June 2013. RDAF Round Five is an allocative funding round, with each local government that was funded under the General Purpose component of the Financial Assistance Grants 2012–2013 eligible to apply for funding for infrastructure projects.

Effectively this means that all 565 Local Government Area’s within Australia will get funding which totals to $149,999,994. The LGA funding details can be found at on the DoRALGAS site.

Given the extensive detail of this it will be quite a challenge to do the analytics.

Here is a look at the funding commencing with a breakdown by State and I’ll add more graphics and detail as I populate the data. 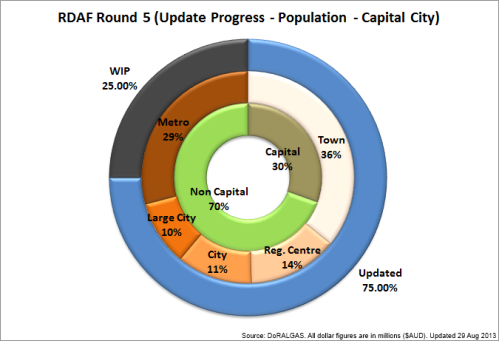 This chart looks at three items.

The inner ring is a split between funding to capital and non-capital cities. To be clear all the State plus the territorial capitals (Darwin, Canberra and Kingston) are included.

The secondary ring breaks down the funding by the size of the population centre that it is being deployed in. Population size is based upon Australian Bureau of Statistics Census 2011 data and then allocated to one of five categories. The categories are:

The outer ring is split between funding that I have been able to populate (data verify to council chamber level) and work still ‘in progress’. Currently I have been able to populate 75% (112.5-million) of the funding with 52% of the councils (294 out of 565). At this time I am in the process of working through those councils that received between $200,000 and $300,000 of funding.

RDAF Round 5 Funding by State

The second chart looks at funding by State and is fully updated.

Round 5 Funding by Political Party 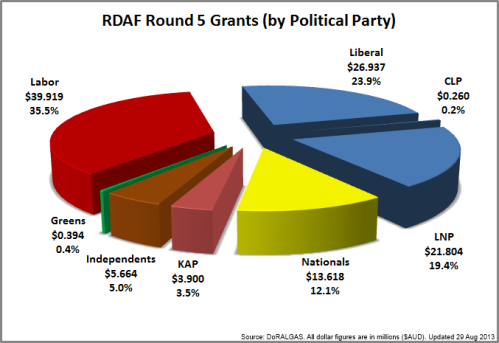 This chart looks at funding by political and is not fully updated (see RDAF Round 5 Funding by Data Population & Population Centre).

To populate the entire chart from the outset I specifically selected a seat held by an Independent, the Greens and Katter’s Australia Party (KAP). On the conservative side (in blue) the slices are split into the Liberal Party, the Liberal National Party (QLD) and the Country Liberal Party (NT). The National Party section (in yellow) also includes funding that was allocated to O’Connor, which is held by Tony Crook of the WA National Party.

Round 5 Funding by 2 Party Preferred (2PP) 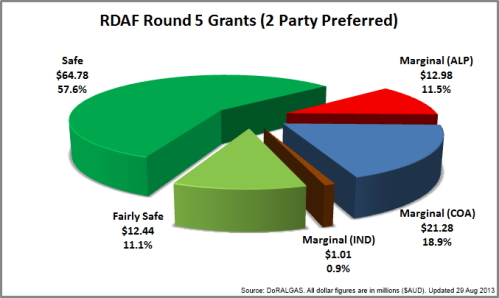 The next chart looks at funding by how safe the seat is considered. The Australian Electoral Commission states that Divisions with a 2-party preferred (2PP) percentile of 60% or greater are safe, those between 56 – 60% are fairly safe and those between 50 – 56% are marginal. Where a seat is considered marginal (based on 2010 election results) I have split into Labor, Coalition and Independent.

I’ll continue to update this article as I populate the data down to LGA level.

Declaration of Interest: I have utilised only publically sourced information and all analysis and views expressed are my own and do not reflect that of any employer or organisation that I am associated with.

Note: My previous posts on Regional Development funding can be found at: