The Mining Workforce Planning Scan is a mixed quantitative/qualitative report card built from relevant online industry magazines and media sources. Utilising 14 category metrics the scan collates relevant stories over a period of time (in this case a calendar month) to give a picture of how the industry is positioned from a workforce planning perspective.

Although Augmentation/Automation only had four stories for the month of July (representing 3.9% of total inputs), the subsequent robust discussion on several forums captured the attention on many industry commentators. University of Queensland’s Centre for Social Responsibility in Mining (CSRM) set off the debate when it released its Exploring the social dimensions of autonomous and remote operation mining: Applying Social License in Design report.

I discussed the subject on LinkedIn via the MiningIQ forum. It’s a lengthy discussion but my comments in relation to employment, posted 24 July 2013 included:

As welcome as this report is, I actually believe the authors are not fully recognising the full downside risks of a fully automated mining environment. Mining currently only employs around 264,000 persons (via Skills Info and correct as at Feb 2013). A cut of 50% in an open pit environment would not necessarily be picked up on the automation side, nor through large scale production increases thus you could start forecasting a peak jobs horizon for mining employment numbers in Australia in the short to medium term.

I also believe that the 50% number of open pit reductions is probably conservative. Just thinking about an Operator Hauler FIFO 14/7 shift with 3 groups in my mind’s eye I can immediately conceive of an 80% reduction as a baseline once an automated system was implemented!

Within a decade I see a case where it will start to become MORE (not less) expensive, at least from an insurance perspective, to choose to operate heavy machinery with only human inputs. Let me be very clear here. As data mining becomes more commercially aware (intrusive) insurance companies will eventually overcharge or refuse to insure those industries which fail to incorporate strict augmentation and robotic controls on industries that utilise heavy equipment including miners.

Many people see automation as an all or nothing argument. That is its robotics and automated systems over all human inputs. This is not the case. My final comments on the forum, added 31 July 2013 covered that as well:

At no time has anyone on this forum discussion or myself stated that there will be no employment in mining. There will always be a requirement for onsite operational and maintenance employee’s, just the numbers will be much lower and the KSAOC’s will need to be much higher. (FYI: Knowledge, Skills, Attributes & Other Capabilities).

Megan Edwards (Editor and Director of MiningIQ) did a good write up of the main points, including some of my comments via Cost Reduction, Automation and Change Management – a Natural Trifecta? (Note: You will need a sign-on to access the story).

Here are the analytics and analysis from July.

The following chart is an 18-month look at 14 mining related workforce planning categories and the amount of times it features as a story.

Employment was the leading category with 42-stories (41.2%), the sixth consecutive month as lead category and almost unchanged in terms of weighting from the June with 38-stories (41.3%).

This is the first time AOD/Crime has finished in the top 3 as a category with data going back to January 2012. Its elevation is due to a noticeable rise in incidents plus an increased willingness for mining companies to report, whereas in the past they may have not discussed these matters publically. An example of a recent incident is an act of sabotage which occurred on a Bechtel worksite on Curtis Island, Queensland. It should also be noted that the ICAC Commission did not feature in my AOD/Crime data as it never impacted on workforce planning or employment.

I’ve also included some key time periods which underline the 18-month story. July 2012 was the commencement of the commodity crash and the first phase of job and cost cutting which saw a spike in Employment related stories (mainly negative). By December 2012 the commodity prices had stabilised somewhat but off peak pricing. At the time I thought that the mining sector had returned to Business-As-Usual (BAU) but from mid-February I’ve picked up another round of job and cost cutting impacting on Employment. This second phase is currently still ongoing and deeper in terms of time period, negative sentiment and employment impact than the first round (Jul-Oct 2012).

The next chart is an 18-month look at 14 mining related workforce planning categories and their positive or negative weighting.

Employment continues its highly negative trend with a further dip in July. At -18 it’s not at its worst level on record which was -20 in September 2012 but it is close enough to warrant further investigation.

At the other end of the scale Engagement recorded a +4, the tenth time in 18-months that it has been the most positive indicator.

The following table looks at the employment current reported gains and losses. Reported job losses are actuals as reported by mining industry sources but often do not reflect the total loss of employment as some companies chose to limit the amount of information in relation to redundancies. Employment gains are forecast and include infrastructure phases of employment. Often employment gains are overstated as they link to public relations exercises.

July is the fourth month this year where reported employment losses were greater than 1,500. With the Queensland Resources Council stating that more than 7,000 mining jobs were lost in Queensland alone the question that I’ll be looking at later this month in a separate article will be “has mining reached its peak jobs number”.

Here’s a look at the July data. 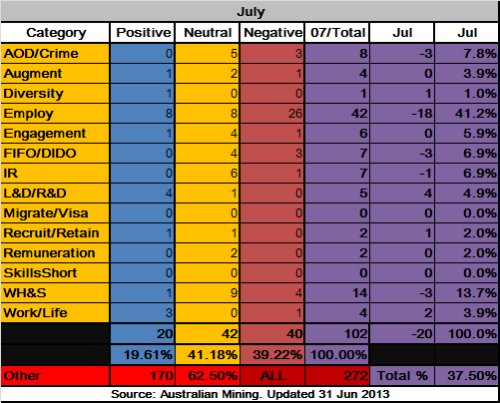 Story of the Month

Did you know that helium is used in the production of semi-conductors and utilised for Magnetic Resonance Imaging (MRI) devices? I was not aware that the United States had a Federal Helium Reserve and that rationing of the gas has already happening. Nothing to do with workforce planning but a great article by Brent McInnes and the pick of my mining reads for July.

Last month I stated that if we had another bad set of Employment numbers in July we would be in a period similar to the commodities crash of July to October 2012.

Upon reflection I’d say that we have now exceeded the commodities crash in terms of employment friction.

Production numbers are certainly up. With more supply capacity coming on-line in coming years and some companies still locked into forward contracts (which means they are shipping commodities, namely coal at less than the total price of production) you won’t see an immediate rebound in pricing.

The risks, especially for employment are on the down side.

This is going to mean further job shedding as companies continue to tighten fiscal belts and this second phase of cost cutting looks to be ongoing, at least in the short term.

Thus more friction and workforce planning pain for both employers and employees.