Back in February 2011, at the height of the Arab Spring, I wrote a blog about Egypt which received a lot of criticism at the time.

With the passage of time however it seems that my worst fears are now becoming reality.

Here is the original piece (20 Feb 2011) titled Egypt: It’s about the Economy and Work, not Democracy via HR.com.

I have a vivid memory of my final year at university.

I was giving a review on Dr Michel Aung-Thwin’s work “Parochial universalism, democracy Jihad and the orientalist image of Burma: The new evangelism” and was rounding up the argument that without security first democracy cannot work, especially in the Asian context. At the end of my presentation one of my fellow students jumped up from his seat and said forcefully that I had ‘crapped on the ideals of democracy and I was a disgrace to the university’. He subsequently stormed out of the lecture room without giving me a right of reply and I went on to get a high distinction in the subject.

Dr Michel Aung-Thwin argued that without economic and physical security you cannot have democracy, or at least a democracy that will last over the longer term.  His work in relation to Burma in the early part of the previous decade is relevant to the issues facing the Middle East and Northern Africa today.

The crisis gripping that region, commencing in Tunisia and Egypt but now impacting other states such as Libya, Yemen and Bahrain is more about the economy than it is about democracy.

Let’s consider the short-term economic implications for Egypt (and they are bleak):

In Egypt the population wants a rapid normalisation but after a month of protests, a significant loss of foreign income (reportedly $300M USD per day) and a military Junta in place, at least until September this is unlikely. A week after the democracy protests ended there are now protests in relation to pay and conditions and many of the key elements of the economy are closed, including financial institutions and many businesses. The Global Financial Crisis has hit Egypt hard and rising inflation, especially rising food prices are hurting the poorest first.

However, the long-term Workforce Planning implications for Egypt and the region are bleaker:

The median age (that is the age at which half the population is older and half is younger) for the West is approximately 40 (Australia has a median age of 36.9 while in Japan that rises to 44.6). Due to a 3 – 4% population growth in the Middle East and North Africa the median age is much lower. In Tunisia that corresponds to 29, Egypt 24, the West Bank and Gaza 20 and in Yemen just 17.  In Saudi Arabia, a rich country that imports most of its working population from the poorest regions of the world around 70% of the population is sub-30.

In Egypt 80% of the population with an age of 29 or less are unemployed. Gender disparity, an issue common to the region is also worrying with only 18% of women out of university finding employment, while for men the rate is 50%.

Recently the International Labour Organisations estimated that the Middle East and North Africa region alone would require 100,000,000 million new jobs to fulfil the requirements of the new entries coming into the system by 2020!

Workforce Development is also an issue. Egypt has an education system which is poorly staffed (teachers in the Middle East are poorly remunerated and trained), poorly maintained with aging infrastructure and legacy curricula but heavily attended. For those who can afford to get a university education in Egypt they then have issues finding employment. Dr Hassan Hakimian, the Director of the London Middle East Institute recently discussed the fact that is takes a university graduate up to 15-years on average to enter the state or public sector.

If you consider this from a Workforce Planning perspective then someone who has worked in a sector or industry for 15 to 20-years in the West would be considered mid-career and perhaps looking to move on to something else or moving up into a higher level of management. In the Middle East and North Africa it may just take this long to get into the system and this will have ‘lag-effect’ issues. One obvious ‘lag-effect’ will be the best and brightest in Egypt and other parts of the region will look to the West for employment opportunities. Why wait until 2026 for a job?

Egypt has a long history of expelling Pharaoh’s from power that couldn’t provide sustainable conditions for the population. Mubarak and his aging cohorts in Egypt are just another dictatorial link in that chain.  The challenge, initially for the Junta but over the longer term for any democratically elected government in Egypt will be to normalise the economy and to get people working again.

If they don’t then the issues facing the region will be far graver than what we are currently witnessing.

As confronting as these statistics are the data has not improved over the past 30-months.

There is no doubt that the Egyptian military (a significant business entity in its own right), followed by the  democratically elected government of Mohamed Morsi and in recent months the interim government post overthrow have not been up to the challenge of improving the economy and getting Egyptians working again.

To emphasise this point here is a look at the official Egyptian unemployment data since 2007. 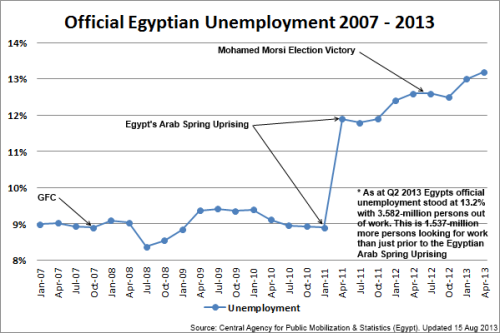 It should be noted that the Central Agency for Public Mobilization & Statistics only counts those ‘individuals who are actively looking for a job but cannot find work’. Given the facts that I presented in early 2011 I would guess that the participation rate in Egypt is staggeringly high, yet official movements in unemployment are still very good indicators of the health on any economy.

I’m not a country specific specialist (outside of Australia of course) but I am a Workforce Planning specialist and the facts that I stated in 2011 have not changed. In fact I would suggest with the continued political instability the situation that I described back then with a further 1.5-million Egyptians looking for work and unable to find it is now worse.

With the very real possibility of Egypt on the brink of large scale violence, even civil war the situation is no longer just grave.