The Mining Workforce Planning Scan is a mixed quantitative/qualitative report card built from relevant online industry magazines and media sources. Utilising 14 data items (expressed as categories) the scan collates relevant stories over a period of time (in this case a calendar month) to give a picture of how Australian MINING is positioned from a workforce planning perspective.

If there was one key theme of the August it was that sentiment shifted from extremely negative to very positive. In fact, the sentiment reading of +14 was the highest I’ve recorded in 22-months of confirmed data.

With most commodity prices stabilised or increasing, the Australian dollar reducing into a more competitive range and miners now fully focussed on increasing productivity have we reached the point where the sector is on the rebound?

At this stage I’m going to say, maybe.

The mining industry has made no secret of its distrust and dislike of the current Labor government (no matter who leads it) and its desire to see a new Coalition team in place. No matter whom leads the next government the following is still true:

The data does look good for August. It’s certainly the best that I’ve seen in a long time.

It could just all be election bounce though.

The following chart is an 18-month look at 14 mining related workforce planning data items (expressed as categories) and the frequency of stories.

WH&S (Work Health & Safety) was the leading category with 20-stories (24.7%). Generally WH&S is one of the leading categories when mining is tracking well or during BAU (Business-As-Usual) as safety programs and incidents reporting is reasonably consistent (averaging 18.25-stories per month in 2013).

Employment was the second leading category with 19-stories (23.5%) as the mining sector paused its cost cutting activities after the election was called and recommenced discussing future prospects. L&D/R&D (Learning & Development/Research & Development) was the third category with 11-stories (13.6%) without any election related announcements.

Subjects that were not discussed in August were SkillsShort (Skills Shortages) and Work/Life (Working Life Fit often referred to as Work Life Balance). The last Skills Shortage story was in March, the only one of the year (or just 0.0006% of all stories). That’s not to say there are no operationally critical, critical or hard-to-fill roles in mining, just the sector has gone through two heavy phases of cost cutting and job shedding thus few employees are moving and turnover rates would be low.

The next chart is an 18-month look at 14 mining related workforce planning data items (expressed as categories) and their positive or negative weighting.

The most negative indicator for the month was IR (Industrial Relations) with a -4 sentiment. As the only negative reading greater than -1 and the most positive month in 22-months of data I wouldn’t read too much into this, especially during an election month. That said, with the Coalition almost certainly forming government next week IR could become a more interesting space.

L&D/R&D was the leading positive category with a +7 for August, the highest positive monthly indicator for 2013. There were a lot of announcements, like the Tasmanian University Research Lab co-funded with Newcrest or the University of Wollongong’s opening of the Joy Global Remote Access Facility as examples.

Given the recent $5.77-billion dollar write-off and job slashing I wonder where Newcrest found $2.5-million to open anything non-core business? Very curious.

The following table looks at the reported employment gains and losses. Job losses are actuals as reported by mining industry sources but often do not reflect the total loss of employment as some companies chose to limit information relating to redundancies. Employment gains are forecast and include infrastructure phases. Often employment gains are overstated as they link to public relations exercises.

With just 22-jobs confirmed lost and 6,885 jobs projected the employment numbers in August were very impressive.

Although it still has to complete the Commonwealth Department of Sustainability, Environment, Water, Population and Communities EIS the Waratah Coal project received Queensland State approval. Officially this project will generate 3,500 infrastructure jobs from 2014 and 2,300 operational jobs from 2016 onwards. As a rule of thumb I think of the coal industry as turning every four infrastructure jobs into one FTE when they commence operations. So 2,300 in 2016 is probably closer to around 900 operational roles.

The Shell Prelude floating LNG were a little more honest when they forecast their job numbers suggesting that 1,000 jobs would be created by 2017 including 350 on the platform and 650-indirectly. LNG is a worse converter of infrastructure to operations phase employment and this is a project where most of the construction is modulised offshore then shipped in. I’ll be following this one closely just to reset my modelling.

Internationally, job shedding is ongoing with 1,700 cut from Oyu Tolgoi (Mongolia) and 920 gone from Tampakan (Philippines).

Here’s a look at the Aug data. 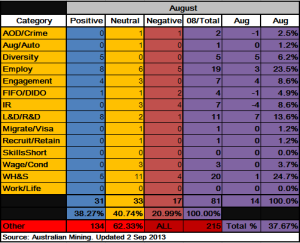 Story of the Month

The story of the month is the Workplace battle which looms over Collinsville and the increasing use of transit workforces as industrial relations instrument rather than a response to skills shortages or for economic considerations.

With the two party preferred split currently sitting at 54-46 (2/09) in the Coalition’s favour it is highly probably there will be a change of government on Sunday.

I’ll enjoy reading this blog in three years but my prediction will be that a Coalition government will not necessarily mean a radical overhaul of Industrial Relations during their first term, even  with a strong push from the business community (*unless there is a massive downturn which impacts Australia).