H7N9 in China “is still present and there is still a great deal not yet understood about this H7N9 virus. Other influenza viruses that circulate in poultry often decrease dramatically during the summer months, only to reappear later in the year during cold season. Also, many low pathogenic influenza viruses in poultry have transformed into highly pathogenic viruses.” (Hiroyuki Konuma, FAO regional representative for Asia and the Pacific, 18th September 2013) 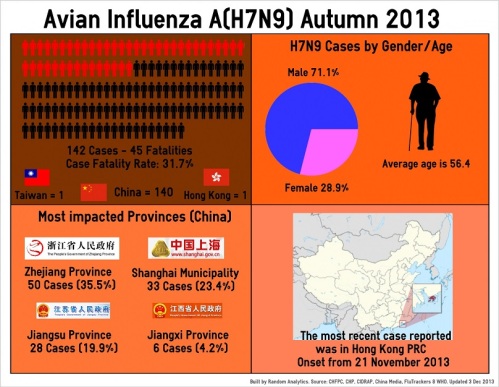 ***** Please note that this infographic of the Avian Influenza A(H7N9) was updated with public source information to 1200hrs 3 December 2013 EST. There will be no more infographic updates for this post *****

After 80-days in the wilderness and with the world’s pandemic attention more focussed on the Middle East the H7N9 virus has popped up again.

When H7N9 was daily news the eye of the storm was concentrated on the provinces of Zhejiang and Jiangsu and the municipality of Shanghai. As the daily case numbers declined after April the movement of the virus seemed to deploy outward at a snail’s pace. In fact the previous four case onsets to this one were Jiangxi (East China), Beijing (North China), Hebei (North China) and in Huizhou, Guangdong (South Central China) barely a 100-kilometres from Hong Kong.

After two cases were reported in the middle of summer H7N9 has backtracked returning to more familiar hunting grounds in Zhejiang half-way through the northern hemisphere autumn striking down a relatively young man, aged just 35 (according to my data the average age prior to this case was 57).

Cause like all good mysteries just as we think H7N9 is gone, it pops up again.

As my calendar permits I’ll keep the infographic updated as new information comes to hand through the autumn months. Here is a look at the first infographic I produced with the 137th case presenting in Zhejiang on the 8th October 2013.

Acknowledgements: Data for this infographic was sourced largely from CIDRAP, H5N1, FluTrackers and the WHO. Background reading supplied mainly via Pandemic Information News, Ian at Virology Down Under and Helen Branswell.