Random Analytics: Bronwyn Bishop and Standing Order 94(a) Ejections (to 15 May 2014)

Fran Kelly’s final point on Insiders (18th May 2014) was that the ejection of Terri Butler (Member for Griffith) on the previous Wednesday under Standing Orders 94(a) brought the count to 100 for Labor and zero for the coalition (and minor parties).

For those in the dark, according to the Australian Parliament House (APH): “On 21 February 1994, a new Standing Order (304A, later 94a) came into effect. This allows the Speaker to order the withdrawal of a member from the Chamber for one hour (‘sin bin’) for disorderly conduct without a question having to be put to the House. Wilson Tuckey (LP, O’Connor, WA) was the first member to be asked to withdraw from the Chamber under this standing order on 24 February 1994, just three days after it came into effect.”

The Speaker for the 44th Parliament is renowned Conservative Bronwyn Bishop and it looks like she is taking no prisoners. 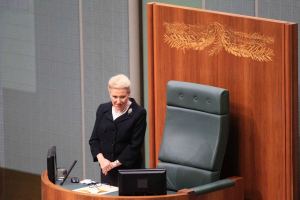 After a detailed look online for the data to support Labor’s claim of 100-0 I could find nothing outside of the claim so I spent a number of hours trawling through both Hansard and Judith Ireland’s excellent Politics Live Blog and put together the figures myself. 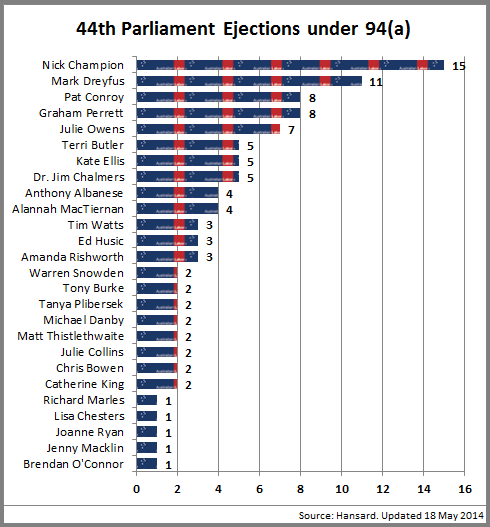 ***** Please note that ALL charts of Standing Order 94(a) ejections during the 44th Parliament were updated with public source information to the end of the ninth sitting week (15 May 2014) ***** The first chart details the list of those ejected from the house. Early money was on the Member for Wakefield to take out the prize for most ejections and he remains the favourite.

To the 15th May 102 Labor members were ejected. The current Top 3 are:

Nicholas David “Nick” Champion (15-ejections) is the ALP Member of the Australian House of Representatives representing the electorate of Wakefield (SA). He won the seat at the 2007 Australian federal election.

Mark Alfred Dreyfus QC MP (11-ejections) is the ALP Member of the Australian House of Representatives representing the electorate of Issacs (WA). He won the seat at the 2007 Australian federal election. He is the former Attorney-General, Minister for the Public Service and Integrity, Minister for Emergency Management, and Special Minister of State in the Second Rudd Ministry.

According to the APH the 10-ejections which occurred on the 11th December 2013 are not the most recorded but at 102 ejections over 37-sitting days the average, which currently stands at 2.8 might well be worth consideration.

When the tally hits 200 it might be worth looking into.

Image Sources: Bronwyn Bishop’s image care of the ABC while photos of individual members are taken from their official Australian Parliament House photo.