After some great suggestions by Anil Adisesh I have found a way to include three levels of complexity into my epidemiological database while only presenting two levels of charts. More work for me but I needed the push from the medical community to make it happen.

For those who have previously looked at my epidemiological/occupational charts (mainly H7N9/MERS) they will see a big uptick in numbers as I add Retirees (Provisional) to my count. The detail will be in my notes but I am now treating those over a certain age (dependent on national legislation) as retirees unless the State in question gives me some the World Health Organisation suggested occupational details. 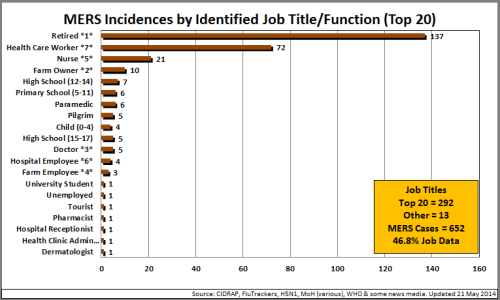 This infographic looks at those infected with MERS-CoV by Job Title. Some job titles do ‘roll-up’ in terms of function, thus a Nurse and a Nurse (ICU) are shown under the same horizontal data-point (see Key Notes). 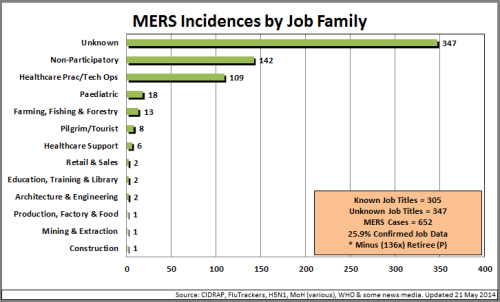 This infographic looks at those infected with MERS-CoV by Job Family. In short I think this is a key infographic for MERS as it gives you some confidence in the key narratives (i.e. that Health Care Workers are over represented in the data as an example). 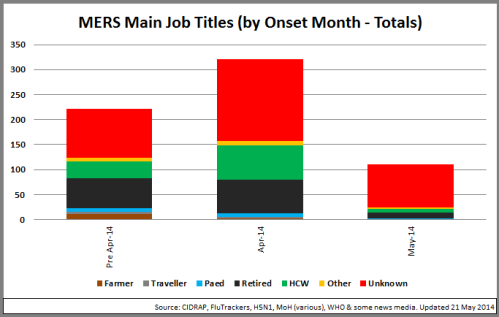 The last chart looks at those overall main job families that are most impacted by MERS-CoV (specifically Farmers, Travellers, Paediatrics, Retired, HCW’s, Other and Unknown).

I now call on Professor Crawford Kilian to add Adel M. Fakieh to the Supari Prize list along with the previous Saudi Health Minister. As many have noted although we saw an initial uptick in publically sourced data from the Saudi MoH the data has now precluded data around occupation (HCW specifically) and expatriate status. This is now pure suppression of data and will no doubt lead to more cases ‘exporting’ from the Kingdom to other countries, including the United States which has now experienced two exported cases and one secondary infection.