Some years ago while working within the Workforce Planning fraternity I quickly understood that June was a tough month for employment, no matter what sector you either guided or worked in. It might have something to do with the seasons given that companies traditionally cut staff in the coldest months. Alternately it might be impacted on the business cycle. After more than a decade in Workforce Planning I’ve found that, whatever your view, business reflects more pragmatic ends.

Last month I suggested that June is often a horror month for mining employment.

My prediction was borne out (no matter the reason). What I didn’t guess was that the job gains versus the job losses would be the worst in more than two-years, potentially making June 2014 the worst month in mining employment since the commencement of the Global Recession (effectively Nov/Dec 2008).

Here are the charts for Australian Mining Employment through to the end of June 2014.

The opening infographic looks at job gains and losses by State or Territory for the month of June 2014.

Data-points: All key mining states (with the exception of the Northern Territory) have lost significant numbers of operational mining (human) capital. The only positive is that Tasmania picked up an additional 50-positions.

The first of my mining employment charts looks at the previous 24-months from a mining employment gain and loss perspective. The positive employment numbers are split into those that reflect infrastructure (tan) and operational (blue) gains. Job losses are represented in red.

The next employment chart looks in more details at the main resource types (Iron Ore, Coal, Gold/Copper, Zinc/Lead/Nickel, CSG/LNG and Uranium) by either a job gain or a job loss.

Of the 3,939 job losses for the month of June the key points are:

It should also be noted that the figures above do not include projected job cuts from BHP Billiton who are currently reviewing their iron ore business in West Australia. 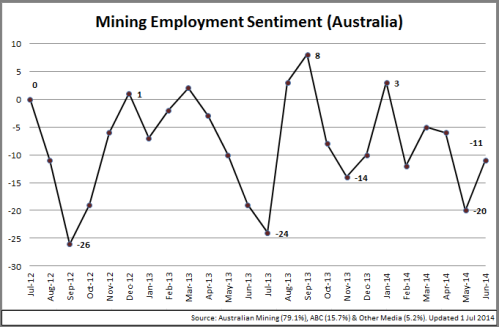 Given that I haven’t commented on this chart for some time the key points are that August –November 2012 and Q4 FY 2012/2013 plus July 2013 were very negative times for mining employment (effectively corresponding with declining commodity prices). We are currently undergoing a similar period with soft mineral pricing from late 2013 through to even more depressed prices in the last six weeks of the financial year.

One last point on the uptick in June 2014. There were lots of positive announcements for mining in June from government (i.e. positive EIS announcements) but little in the way of immediate positive employment benefits.

Whitehaven Coal is cutting jobs at its coal handling and preparation plant at Gunnedah in response to “tough” coal market conditions. At the same time they are not releasing much in the way of details or numbers of the people they are putting out of work and potentially on the bench for an extended time. I look forward to a future update.

After two years of consecutive coal mining employment losses due to depressed thermal and metallurgical coal prices the continued low iron ore pricing will see a similar (and consecutive) drip feed of employment decline in that resource group.