Random Analytics: MERS by Occupation (to >375)

Since my last Middle Eastern Respiratory Syndrome update (21 May 2014) there have been a number of key developments and even some improvements in data quality coming out of the Kingdom of Saudi Arabia.

The big announcement since my previous post was the addition of 113 legacy cases by the KSA Ministry of Health. Of the 113-cases, 42 were Health Care Workers and are included in the following charts.

Almost as importantly, the Saudi’s are now sharing their data with the World Health Organisation (WHO). The Disease Outbreak Notifications, or DON’s, are very comprehensive, light-years away from the Health Ministries updates of the past. With some irony I was pleased to see that Iran and the Kingdom featured together in the most recent DON. Perhaps we are seeing a form of MERS diplomacy occurring.

Here are the latest MERS by Occupation charts.

This first chart looks at those infected with MERS by Job Title or Function. 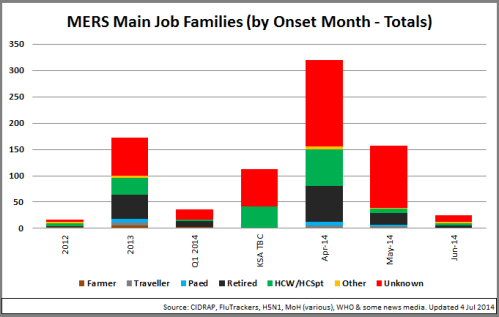 The last chart looks at those overall main job families that are most impacted by MERS, specifically Farmers, Travellers, Paediatrics, Retirees, HCW & HCSpt (combined), Other and Unknown.

Last month I tweeted that the Iranian Nursing Assistant (FT #827) should be counted as a Health Care Support worker rather than a HCW. I then got a number of return tweets from the likes of Helen Branswell, Ian M Mackay and others who disagreed with that line of thought.

When Helen and Ian ‘guide and advise’ it’s probably worth not disregarding that advice. Upon some personal review I decided that perhaps I had taken a too hard Workforce Planning line to my job functions without fully considering the clinical implications.

I have subsequently reviewed my thinking and have re-organised my data along the following lines.

I am continuing to track Health Care Support personnel (there are four job titles already identified in the MERS data including Health Clinic Admin Officer, Health Domain Worker, Hospital Employee, Hospital Receptionist) as I believe the differentiation from HCW is important but I am including their data in job family charts and infographics.

In the end, I made a bad call and I thank those of you who took the time to correct my thinking.

Flublogia is certainly a community and one I truly appreciate being involved in.