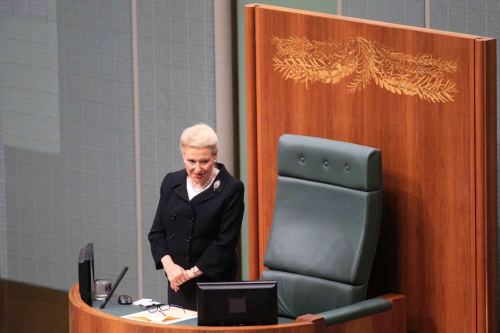 The first chart details the list of those ejected from the house under Standing Orders 94(a). At the end of the 14th sitting week there were 144 ejections, of which 141 (98.0%) were from the Australian Labor Party, two (1.4%) were from the Liberal National Party and just the one (0.6%) for the National Party.

Nicholas David “Nick” Champion MP (20-ejections) is the ALP Member representing the electorate of Wakefield (SA). He won the seat at the 2007 Australian federal election.

Mark Alfred Dreyfus QC MP (12-ejections) is the ALP Member representing the electorate of Isaacs (WA). He won the seat at the 2007 Australian federal election. He is the former Attorney-General, Minister for the Public Service and Integrity, Minister for Emergency Management, and Special Minister of State in the Second Rudd Ministry.

Pat Conroy MP (11-ejections) is the Member representing the electorate of Charlton (NSW). He won the seat at the 2013 Australian federal election.

Ewen Jones MP (2-ejections) is the Member representing the electorate of Herbert (QLD). He won the seat at the 2010 Australian federal election.

There have only been two Standing Order 94(b) ejections thus far. They are Mark Dreyfus (ALP) and Wayne Swan (ALP). 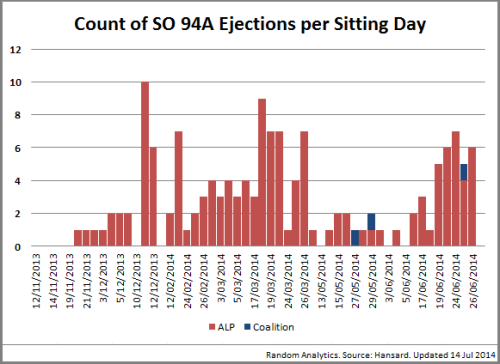 The final chart is a look at the Standing Order 94(a) ejections by sitting day. As you can see they tend to pick up in the second last week of each large sitting period or at the end of the calendar year. In this update I’ve been able to include some colour as three ejections have come from the Coalition.

Image Sources: Bronwyn Bishop’s image care of the ABC while photos of individual members are taken from their official Australian Parliament House photo.