Mining continues to play an important part in the overall economy of Australia. For all of the discussion about the sector many people don’t realise that mining only employs a fraction of Australia’s workforce (currently just 264,400 source: ABS) and that many in the industry work on the construction rather than the operational side.

Each month I spend some time collating stories from a wide range of industry and media sources to build some analytics around the current state of mining employment in Australia. Here are the charts for Australian Mining Employment through to the end of July 2014.

The opening infographic looks at job gains and losses by State or Territory for the month of July.

Data-points: After a horror month in June when 1,592 jobs were lost Western Australia has picked up some employment this month with announcements by Atlas Iron (+200) and Transalta (LNG +250). For the rest of the country the numbers were all in the negative, even in New South Wales which gained 450 (Whitehaven Coal) but lost 915 overall including big numbers in the Hunter Valley. Overall the nation gained 920 and lost 2,043 mining jobs. 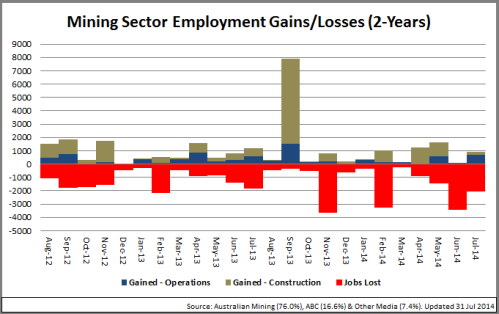 The second employment charts looks at the previous 24-months from a total mining employment gain and loss perspective. The positive employment numbers are split into those that reflect infrastructure (tan) and operational (blue) gains. Job losses are represented in red.

The biggest data-point for July 2014 was that the big numbers seen last month reduced slightly as those some of those jobs finalised in July and that we are now in the third month of 1,000+ job losses and the second consecutive month of 2,000+ job losses. The last day of the month was especially bad with 400 Hastings Deering jobs going in Queensland and another 95 coal positions being axed by BHP in NSW.

It wasn’t all bad news as some large operational announcements, like the Whitehaven Coal announcement of 450 jobs at its Maules Creek mine offset some of the big losses being announced in the Hunter Valley.

The next employment chart looks in more detail at the main resource types (Iron Ore, Coal, Gold/Copper, Zinc/Lead/Nickel, CSG/LNG and Uranium) by either a job gain or a job loss. 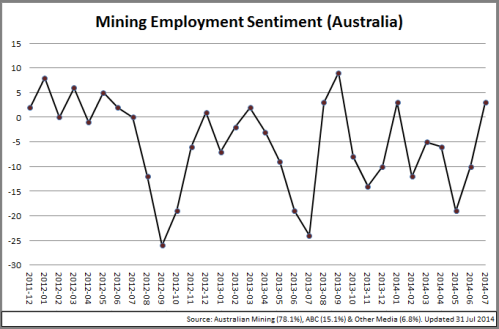 The last chart tracks employment gains and losses sentiment and is now updated back to December 2011.

Although the employment news is quite bad the sentiment is actually positive. I’ve seen this occur before. If you look at the difference between Jul 2013 (-24) and August 2013 (+3) you see a big jump in sentiment. This occurred during last year’s commodity crash as government pushed through mining approvals (which is a positive indicator even though it might not include any immediate employment outcomes). So although there are continued job cut announcements they are being largely offset (in terms of sentiment) by positive future announcements, such as the Adani announcement for the build of Carmichael Coal in Queensland.

Silver Lake Resources is set to cut more jobs as the gold miner closes its Lakewood Mill but didn’t announce how many would go or when.

It’s been another bad month for mining employment which came as a surprise as often the first month in a Financial Year is a chance for companies and governments to highlight some good news or to make positive announcements. This is reflected in the data where job losses outweigh job gains but sentiment is improving.

Saying that governments don’t create jobs, businesses do and with so much infrastructure finalising and the narrative squarely fixed on productivity I’ll suggest that you will see more negative than positive news in coming months.

One Comment to “Random Analytics: Australian Mining Employment (to July 2014)”