ReliefWeb is reporting more cases in Liberia over the past 24-hours with data updated to 16 August 2014. The NIGERIA Daily Situation Report (SitRep No: 17) Date: 16th August 2014 includes a new confirmed case and three suspected cases. Crawford Kilian via his excellent H5N1 site has been following reports of a suspected case from Kaduna State, although this is not reported in the latest update (noting that said update is now almost three days old). The article coming out of Nigeria in relation to Kaduna can be found here and here while the counter-article can be found here.

As Crawford correctly points out Kaduna is an 80-minute flight away from Lagos where the imported outbreak is taking place. According to Google if you wanted to drive the 775-km it would take you about 10-hours. 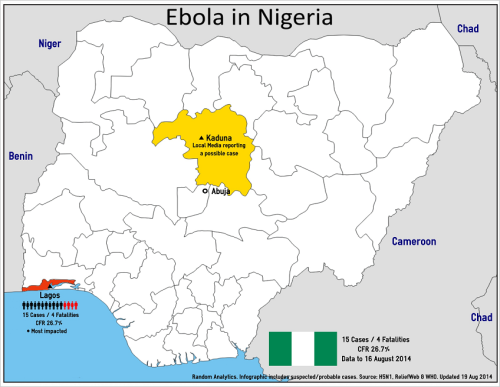 The above infographic details the cases and fatalities from Ebola in Nigeria. Cases include all suspected, probable and confirmed cases and the provisional CFR is based on those total numbers (whereas ReliefWeb uses only confirmed numbers for their CFR).

The only confirmed Nigerian State to be impacted by Ebola is Lagos from an imported case back in late July where there have been 12-confirmed cases (4 deceased with some now released and some still in quarantine). The other point I wanted to make out was that the most recent articles from Nigeria have mentioned both a case from Kaduna and effectively a retraction that could be the case.

We are still in the ‘Fog of the Outbreak’ thus I have highlighted Kaduna State and await more information and evidence.