It is noteworthy that over the past 24-hours we have received confirmation from the Liberian Ministry of Health and Social Welfare that the confirmed, probable and suspected cases of Ebola have now topped 1,000. 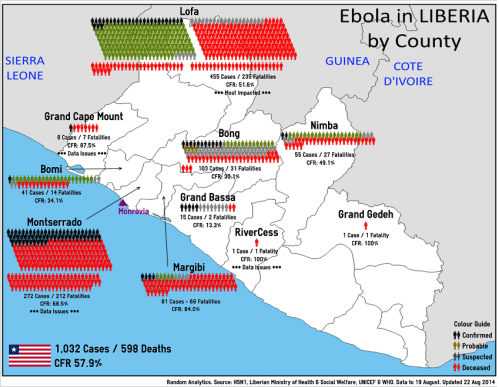 The Ebola in Liberia by County infographic details the cases and fatalities from Ebola. Each Country which is impacted by Ebola is listed with individuals listed as confirmed, probable, suspected then deceased. The provisional CFR is based on those total numbers.

The outbreak is ongoing so these numbers are still very provisional.

The other interesting find from doing this infographic was the Ministry of Health and Social Welfare data has some issues.

I’ve highlighted the data anomalies (where confirmed, probable and suspected cases are less than the deaths). This could be an issue of how they have structured the original document (where case lines are opposite to death lines making it easy to input the wrong data).

I suspect that the analysts in the Ministry are under a lot of pressure. I’ll pass on my findings to ReliefWeb and the Liberian Ministry of Health and Social Welfare for their review and consideration.