Here are three updated charts of the 2014 Ebola Virus Disease outbreak using a number of primary sources including the most recent World Health Organisation Disease Outbreak News (DON) released 4 September 2014 with data to the end of August. As new updates occur I try to update the charts and promulgate via Twitter. 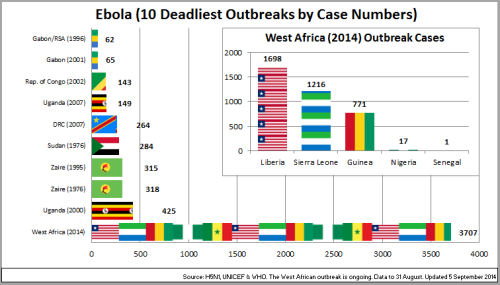 The first chart displays the top 10 outbreaks in order of case numbers. Each horizontal bar is filled with the flag(s) of the country where the outbreak occurred. In the case of the West African outbreak there are now five countries involved and the flags are in number of cases order.

With clinical cases now reaching more than 3,700 the West African outbreak has now become largest Ebola outbreak in history based on both case numbers (3,707) and fatalities (1,848). The second largest outbreak was of Ebola Sudan which occurred in Uganda (2000) when 425 became infected and 224 died. The recent outbreak is the first to migrate across international land borders. The only other recording of an EVD that jumped borders prior to this outbreak was the Gabon/RSA (1996) outbreak. In that instance a doctor caught the disease in Gabon and subsequently took an international flight to South Africa where he became ill and infected other Health Care Workers (HCWs).

Ebola (Cases by Classification and Year)

The second chart shows cases by classification (in order they are Ebola Zaire, Sudan, Bundibugyo, Reston and Ivory Coast) by year and then split into those recovered or those deceased (which follows in a red variant). The combined West African and DRC outbreaks has become the most significant in terms of case numbers by year, eclipsing the 1976 dual outbreaks (Zaire and Sudan) which saw 603 cases and 431 deaths (a combined Case Fatality Rate of 71.5%).

On a side note I really need to re-organise this chart to display 2014 horizontally because the sheer size of the outbreak has destroyed any clarity of previous years. A project for next week. 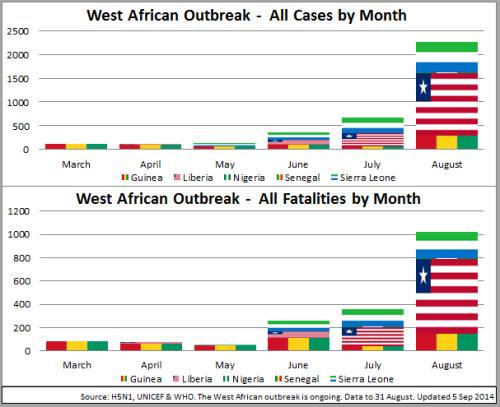 The final chart shows both case numbers and fatalities by month. Each column is split into the five impacted countries with data visualised by the varying national flags.

Although I am only an amateur epidemiologist this has been a very telling chart and details how the epidemic curve has continued to increase over time. According to predictions by the World Health Organisation the outbreak may continue to grow and infect up to 20,000 persons so we are more than likely to see a further increase in both case and fatality numbers in September.

If you are interested in following this developing story I would suggest you follow/read Helen Branswell (Canadian health journalist for the in-depth stories) or Crawford Kilian and his excellent health related blog for all the big health related chatter including links to key Ebola persons and organisations.

For really good analysis and consistently updated charts in professional charting software (Tableau, Piktochart et al) I favour fellow Queensland Ian M. Mackay and on the other side of the Pacific pond, Maia Majumder. I do a range of other infographics (I like to think of them as data paintings) including analysis in the Flublogia space, when I find the time. My last health related piece was on Ebola in Sierra Leone.