“We are pleased to say we have controlled the spread of the epidemic.” Francois Fall, Foreign Minister, Guinea (14 April 2014).

“First and foremost, I want the American people to know that our experts, here at the CDC and across our government, agree that the chances of an Ebola outbreak here in the United States are extremely low.” Barack Obama, President, United States of America (16 September 2014)

As the United States grapples with its first case of the Ebola Virus Disease (EVD) it is worth noting that the disease is ravaging West Africa causing thousands of deaths, destroying capabilities, causing starvation and reeking further economic devastation across one of the poorest regions in the world.

According to the World Health Organisation (WHO) which issued new data on the 1st October 2014 the West African EVD outbreak, which is ongoing now has 7,178 clinical cases with 2,800 in past 21 days (39.1%); and 3,338 deaths (a provisional Case Fatality Rate or CFR of 46.5%). Health Care Workers who are the front-line workers in the fight against EVD are also overly represented in the casualty statistics. Currently there have been 377 clinical cases (5.3%) and 216 deaths (6.5%). The latest update does not include the new case which presented in the United States.

What started as a post-graduate project to build a five-minute Ebola Virus Disease (EVD) lesson utilising just five graphs and six-dot points has now turned into more than 20 charts and infographics.

Here is a look at four charts or infographics of EVD across Africa with WHO data confirmed to 28 September and where applicable will include the US case. 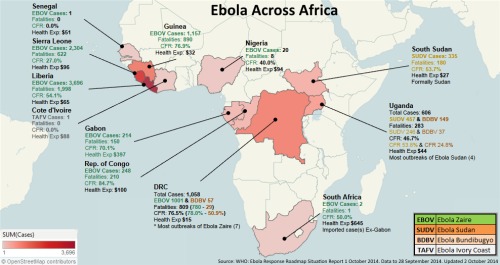 The Ebola across Africa infographic details the country specific outbreaks of Ebola since it was first discovered in 1976 (with a 1972 retrospective case from Zaire included). When I first completed this infographic in April the bulk of the outbreaks of Ebola Zaire had occurred in Central Africa with the Democratic Republic of Congo being the country most impacted in terms of outbreaks, cases and deaths.

Three interesting data-points have occurred over the past half-year. The first data-point is the fact that the weight of Ebola Zaire cases has shifted from Central Africa to West Africa (and now includes Nigeria and Senegal as countries where the disease has exported itself to). The second point is while EVD ravages West Africa another unconnected outbreak has occurred in the DRC.

The last point I think is really interesting and not fully reflected in the infographic is the differential between health expenditure of those countries impacted by Ebola in Africa versus that spent in the United States. In Africa the impacted countries health expenditure per capita ranges from just $15 in the DRC to $96 in Sierra Leone, while in the United States the amount is $8,895.

Notes: The 1976 – 2004 outbreaks of Ebola Sudan occurred in the bottom half of Sudan (now South Sudan). Zaire was renamed the Democratic Republic of Congo in 1997. Health expenditure per capita is expressed in $USD and represents 2012 data.

The first chart displays the top 10 outbreaks in order of case numbers. Each horizontal bar is filled with the flag(s) of the country where the outbreak occurred. In the case of the West African outbreak there are now six countries involved and the flags are in order sorted by number of cases.

With clinical cases now above 7,100 the West African outbreak has now become largest Ebola outbreak in history based on both case numbers (7,179) and fatalities (3,338). The second largest outbreak was of Ebola Sudan which occurred in Uganda (2000) when 425 became infected and 224 died.

Another couple of very interesting data-points. The first is the fact that the West African outbreak is the now the first to cross national land borders and the first to travel internationally out of Africa. The only other recording of an EVD that jumped borders prior to this outbreak was the Gabon/RSA (1996) outbreak. In that instance a doctor caught the disease in Gabon and subsequently took an international flight to South Africa where he became ill and infected other Health Care Workers (HCWs).

The second interesting point is the inclusion of the latest DRC outbreak. With 70-cases and 42-deaths recorded to date it has now moved into the 9th largest outbreak by case numbers.

Ebola (Cases by Classification and Year) 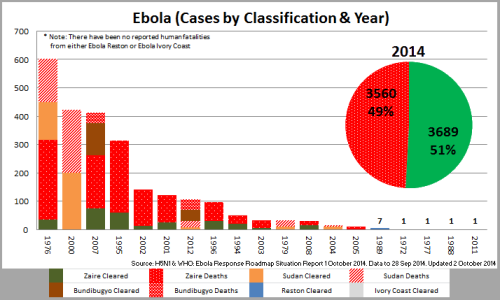 The next chart shows cases by classification (in order they are Ebola Zaire, Sudan, Bundibugyo, Reston and Ivory Coast) by year, split into those recovered or those deceased (which follows in a red variant) and ordered from most impacted to least impacted year. Due to the severity of the latest outbreak I have removed 2014 as a column and included it as a separate pie chart.

The combined West African and DRC outbreaks has become the most significant in terms of case numbers by year, eclipsing the 1976 dual outbreaks (Zaire and Sudan) which saw 603 cases and 431 deaths (a combined Case Fatality Rate of 71.5%). 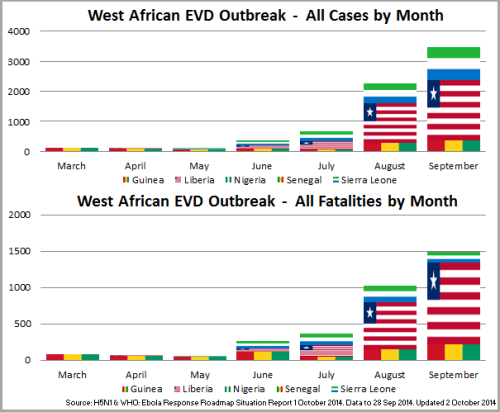 The final chart shows both case numbers and fatalities by month. Each column is split into the five impacted countries (the USA will most likely find its place with the October data). The data is visualised by the varying national flags.

The obvious data-point from the infographic is that the epidemic curve continues to increase month on month with data still outstanding for the 29th and 30th of September.

Over the past 24-hours a lot has been made of the first case reported from the United States. As much as that is bad news the disease is destroying several countries as we speak so I am hopeful that the attention the US case creates might mean more support for the countries that are currently doing it very tough.