The outbreaks of EVD in Senegal and Nigeria were declared over on 17 October and 19 October 2014, respectively.

EVD transmission remains persistent and widespread in Guinea, Liberia, and Sierra Leone. All but one administrative district in Liberia and all administrative districts in Sierra Leone have now reported at least one confirmed or probably case of EVD since the outbreak began. Cases of EVD transmission remain lowest in Guinea, but case numbers are still very high in absolute terms. Transmission remains intense in the capital cities of the three most affected countries. Case numbers continue to be under-reported, especially from the Liberian capital Monrovia.

Of the countries with localized transmission, both Spain and the United States continue to monitor potential contacts. On 21 October the single patient with EVD in Spain tested negative for the disease for a second time. Spain will be declared free of EVD 42 days after the date of the second negative test unless a new case arises during that period.

On 22 October 2014, WHO convened the third Emergency Committee on Ebola under the International Health Regulations (2005).

Here are three charts or infographics of the West African Outbreak with data confirmed by WHO to 18/19 October 2014. 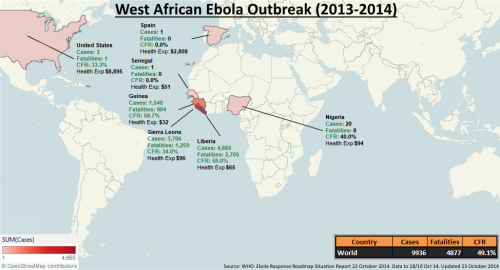 Midway through October the biggest data find for me has been the difference between the index cases in Senegal and the United States. Lots of similarities but IMO four very important differences: 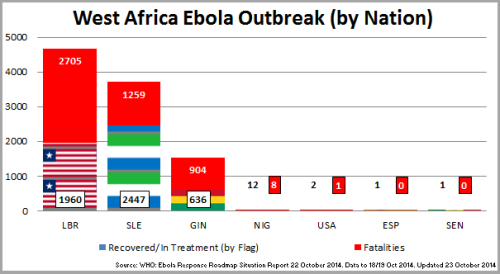 The West African Ebola Outbreak (by Nation) chart looks at the split between those recovered or still in treatment and those deceased. As per the latest update from WHO there is an element of underreporting going on in the worst impacted countries (Liberia, Sierra Leone and Guinea). 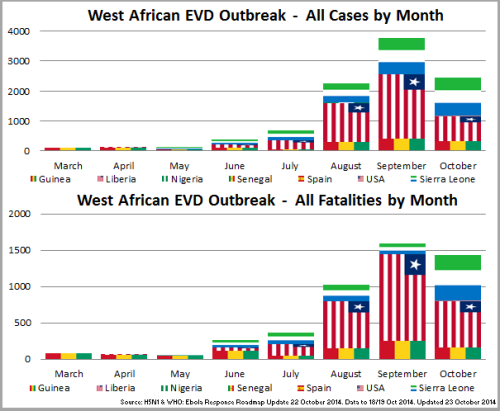 The West African EVD Outbreak – All Cases/Fatalities by month details the epidemiological curve of the outbreak from March 2014 when the first cases and deaths became apparent. Each column is visualised by the flags of the seven impacted countries.

The mid-month data-find from this chart is that the epidemic curve in relation to deaths continues to increase month on month yet the case load seems to be pulling back. All the anecdotal evidence coming out of West Africa points to an increasing, rather than a decreasing case load as individuals, families and population centres avoid health care facilities. In past months, the case load mid-month would be approximately equal to the previous month. Best case scenario would be that West Africa is getting on top of the disease but the facts-on-the-ground don’t support this. I’d expect to see some revisions to the data in coming weeks and months.

I’ll update and post my charts again when the data becomes available for the entirety of October. In the meantime if you want to keep across the West African outbreak detail via some alternate sources then I would recommend Crawford Kilian and for more regular epidemiological posts Maia Majumder, MPH and Ian Mackay, PhD.