Following the WHO Ebola Response Roadmap structure, country reports fall into two categories: 1) those with widespread and intense transmission (Guinea, Liberia, and Sierra Leone); and 2) those with or that have had an initial case or cases, or with localized transmission (Mali, Nigeria, Senegal, Spain, and the United States of America).

Here are three charts/infographics of the West African Outbreak with data confirmed by WHO to 5 November 2014. 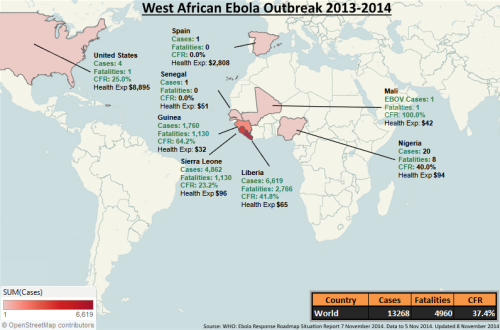 The data point of interest for me in the past fortnight has been the revision in numbers that WHO has provided. In the most recent update case numbers in Sierra Leone have been significantly revised down, while in Liberia where cases are on the apparent wane the numbers were revised upwards. Data for Mali has been included in this update.

The West African Ebola Outbreak (by Nation) chart looks at the split between those recovered or still in treatment (highlighted by flag) and those deceased (in red).

A data point of interest here is the case difference between Sierra Leone and Guinea yet a similar amount of deaths. Provisional CFR is Sierra Leone is 23.2% compared to Guinea which is a much higher 59.9%. Surely that can’t be correct? 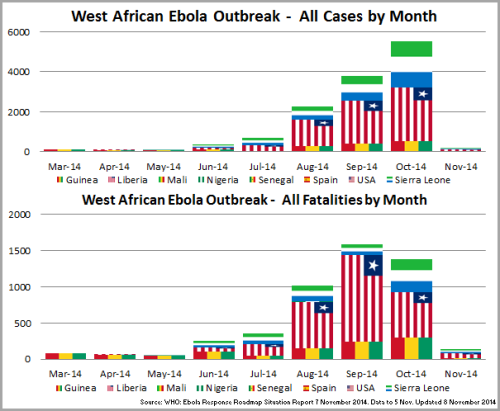 The West African EVD Outbreak – All Cases/Fatalities by month details the epidemiological curve of the outbreak from March 2014 when the first cases and deaths became apparent. Each column is visualised by the flag of the eight impacted countries. Note: Due to revisions in late October as provided by WHO I have finalised the October numbers as at 2 November.

The data point of interest in the last chart is the epidemic curve differences between cases (still rising) and deaths (decreasing). I would have expected that both should increase or decrease in tandem. I suspect missing data would account for the anomaly.

I’ll update and post my charts again when the data becomes available for the entirety of November. In the meantime if you want to keep across the West African outbreak detail via some alternate sources then I would recommend Crawford Kilian and for more regular epidemiological posts Maia Majumder, MPH and Ian Mackay, PhD.