Over the African summer there have been several small outbreaks of Rift Valley Fever in both South Sudan and Uganda. In Yirol East, Eastern Lakes District in South Sudan an outbreak has resulted in six confirmed cases with three deaths. In Uganda there have been five cases spread over a wide area in that countries cattle corridor resulting in five cases and four deaths.

Here are the key facts about Rift Valley Fever via the World Health Organisation (updated July 2017).

According to WHO, since 2000 there have been 15 significant outbreaks of Rift Valley Fever which have impacted 13-countries and at least one case was exported to China.

Here is a look at the Rift Valley Fever outbreaks by country since 2000. 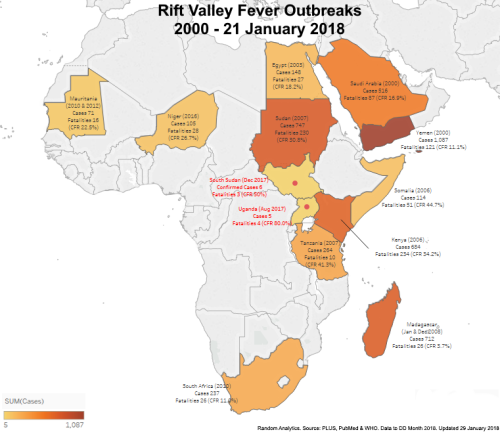 NOTE: The 2007 Sudan outbreak occurred prior to the creation of South Sudan but the outbreak was limited to districts within modern day Sudan.

As of 21 January 2018, a total of 15 suspect RVF human cases have been reported in Eastern Lakes State. Out of the 15 suspect human cases reported since 7 December 2017, three human cases have been confirmed, three died and were classified as probable cases with epidemiological linkage to the three confirmed cases, four were classified as none-cases following negative laboratory results for RVF, and laboratory testing is pending for the other five suspect cases.

At the moment – field investigation (human, animal, entomological) are ongoing; supportive care to suspect cases; and social mobilisation and risk communication. Discussions on a joint Ministry of Health and Ministry of Livestock and Fisheries outbreak declaration are ongoing at the highest levels of Government.

The Ministry of Health in Uganda confirmed an outbreak of the Crimean-Congo Hemorrhagic Fever and Rift Valley Fever in Nakasseke and Luwero respectively.

Regarding RVF, a total of five patients including four deaths have been confirmed in this outbreak. Cases have been sporadic, with no epidemiological link, and are spread out in diverse geographical areas in the cattle corridor. This is the second time RVF cases are confirmed in Uganda.

During a press conference at the Uganda Media Centre, the Minister of Health, Dr Jane Ruth Aceng informed the media that the government has employed rapid interventions to manage and control the outbreaks. She also revealed that a National Rapid Response Team of expert epidemiologists, clinicians, veterinarians, communicators and laboratory specialists was deployed in the affected districts to establish and support the response structures.