The Dow Jones Industrial Average closed down 1,032-points overnight. This marks the second time in history that Index has closed down more than 1,000-points in a single day and is the second worst point’s on record. Although not even close to the worst day historically it does signal a surge in volatility that is spooking investors. Here is the updated chart. 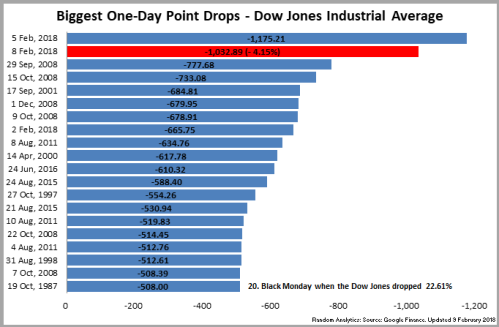 Some analysis via the Australian Broadcasting Corporation. Dow Jones plunges over 1,000 points as Wall Street and European sell-off deepens. Excerpt:

The blue-chip Dow Jones index closed 4.15 per cent lower at 23,860. In the final hour of trade, the S&P 500’s and Nasdaq’s losses deepened to 3.75 and 3.9 per cent respectively. The Dow and S&P are in correction territory, having fallen by more than 10 per cent since January 26, when they hit record highs.”

“The dust hasn’t settled yet, and I think both buyers and sellers are trying to figure out what this market really wants to do,” said Jonathan Corpina, Meridian Equity Partners’ senior managing partner. “I would think that this continues to happen for the next few trading sessions for everything to kind of get flushed out.”

Every S&P sector posted losses, with financials (-4.3pc), technology (-4.3pc) and consumer cyclicals (-3.9pc) being the worst performers. US market volatility jumped by 27 per cent overnight, with CBOE’S volatility index (VIX) rising to 35.17. The measure for market anxiety has more than doubled since last Friday — prior to the mass sell-off when the VIX index was at the relatively low 14.3

Furthermore, the London, Paris and Frankfurt indexes tumbled overnight, with falls between 1.5 and 2.5 per cent. During the European session, the Bank of England voted unanimously to keep British interest rates on hold. But the UK central bank warned rates may need to rise sooner, and by more than it had previously expected, due to an improving global economy.