I had been doing memory recall exercises for some weeks at this point.

The process consumes me. I’m not really ready for this type of Rapid Exposure. As I sit with my psychologist we do the work and then he spends time ‘bringing me down’. When I do it on my own I go for hours. I’m a student who thinks he is a professor.

I’m merging into an old pattern which I am starting to recognise. It’s my roller-coaster. Every six to nine months. For more than two decades.

The memory work has been fruitful. I’ve remembered taking the mefloquine which was the SOP (Standard Operating Procedure) at the time. Is that enough to prove I was given mefloquine?

One of the boys gives me a doctor in the United States who I can talk to. I approach him with the evidence I have. He advises that it isn’t enough. I have no notation of mefloquine on my medical records. In fact he noted that I was cleared for doxycycline.

I’m devastated. It doesn’t matter what I can remember or what the SOP was at the time, without some sort of concrete evidence I know I’ll have a hard time proving my exposure.

I do more memory work. I should be resting. I look terrible. I feel awful. I’m not sleeping.

I get a memory.

Sausage rolls! I’m sitting in a clinical room across from a nurse who is taking notes. I’m at the Red Cross giving blood. The nurse gets excited about my blood because I had been given an anti-malarial without travelling (which is very unusual). I was there for hours too because I remember getting sausage rolls. In 1997 that was a big deal. Normal blood donations usually meant jatz biscuits with some cheese, not the luxury of sausage rolls!

At this stage I still cannot remember what I was given but despair has turned to elation.

Reality kicks in. What did I tell the nurses back in 1997? If I told them what medications I had taken did they note it? Do the notes still exist? How the hell do I access decades old records from the Red Cross?

I make a call to the Red Cross. They explained the process. I email the paperwork on the 5th March.

A doctor from the Red Cross returns my call on the 14th March. The news is confirmation of the worst. I was given mefloquine by the Army in March 1997.

I remember screaming into the sand in front of my kids when I heard the news. It was pure RAGE. We had taken the day off to enjoy a swim at a local creek. I had to collect myself before I thanked the doctor. I am so angry I gave my eldest son my phone. It takes me hours to calm down.

I finally calm down.

The evidence was compelling. Not only had I been given mefloquine in 1997 the Army had failed to note it.

Thank goodness for sausage rolls and the Red Cross!

From February 2019 to February 2020 as my amnesia started to lift I took the time to write down some of my memories and experiences as a series of short stories.

In the meantime here is an index in order of when they were written.

Over the weekend I come across a story from Britain.

Lord Dannatt, who was chief of the general staff in the UK between 2006 and 2009, warns of a suicide epidemic amongst veterans during a visit to the Portsmouth-based military support group Forgotten Veterans UK.

During his visit he talks about the cost effectiveness of the work being undertaken by the charity as well as  how the government of the day and charities should be doing more. Via The News. Former British Army boss brands UK’s veteran suicide crisis the ‘epidemic of our time’. Excerpt:

Britain’s veteran suicide crisis has been branded part of the ‘epidemic of our time’ by the former head of the British Army, who admitted more needs to be done to stop traumatised troops from killing themselves.

General Lord Richard Dannatt admitted he was appalled by the number of people taking their lives in the UK and described the situation as a ‘tragedy’.

Lord Dannatt has come up on my radar previously. Not because he took mefloquine but because he refused it on health grounds. Via The Guardian. Ex-army chief apologises to troops over anti-malaria drug. Excerpt:

Lord Dannatt, who was chief of the general staff between 2006 and 2009, told BBC2’s Victoria Derbyshire programme he would not take the drug because of his son’s experience with it.

Dannatt said his son Bertie had suffered mental health problems after taking two doses of Lariam before visiting Africa in the late 1990s. He was not in the armed forces at the time but had been prescribed the drug by his father’s army doctor.

He is currently the highest ranking officer on record to refuse mefloquine. Mefloquine is a drug that is known to increase the chance of suicide amongst veterans.

Oh, the hypocrisy of old Generals. Picture: Habibur Rahman (via The News)

I am starting to get noticeably sick but I don’t know what from. Not all the physical symptoms have arrived. My tinnitus was always present but mild. I put the vertigo down to heat, bad ankles or alcohol. My teeth and gums are still good. My face hasn’t gone red as yet. The fine tremor in my hands hasn’t started. I spasm in my sleep but the terror of having been given epilepsy is in my future.

The black dog never goes away. It has been with me for decades. It was accepted by the Army although they blame me for its occurrence. Over the years my family has become inured to its silent damage. My marriage hasn’t collapsed but the writing is on the wall.

I am watching the new Simon Schama series the Power of Art. We get to the episode dedicated to the life and works of Michelangelo Merisi di Caravaggio.

I don’t know the first thing about Caravaggio. Some people are turned away from him. He is unstable yet he has a power to turn art into majesty. He pioneers the art form of chiaroscuro, the contrast of light and shadow. He is constantly in trouble. He drinks too much, prefers to sleep in cheap rooms and hang out with his cronies, who are little more than local bully-boys.

His art reeks of the dirt, sweat and blood of everyday life. In Young Sick Bacchus he makes God human. The Martyrdom of Saint Matthew is portrayed as the brutal murder it would have been. The victim lying on the floor on the cusp of shadows, his assailant highlighted with blade in hand ready to finish the killing. It’s all too real for the Catholic Church.

Caravaggio kills a man in 1606 in a duel but it is actually little more than a cold blooded murder. He is exiled and tries to paint his way out of trouble. In a cruel twist of fate he is pardoned but imprisoned on his way home. He gets out of his prison but misses his boat. He dies walking back to Rome with the painting of David with the Head of Goliath. It is a gift for Cardinal Scipione Borghese, the Prince of the Catholic Church who has pardoned him.

I am captured by this painting. Caravaggio is Goliath. He has painted himself as a villain. The young David is surrounded by light. I finally get art because I see an artist I understand. I totally get Caravaggio. It helps explain what is going wrong in my head.

I too am Goliath.

As Simon Schama noted in his documentary:

In Caravaggio’s time it was believed that artists were given their talent by God to bring beauty to the world and to put mortal creatures in touch with their higher selves or souls. Caravaggio never did anything the way it was supposed to be done.

In this painting of the victory of virtue over evil it’s supposed to be David who is the centre of attention, but have you ever seen a less jubilant victory? On his sword is inscribed “Humilitus Occideit Superbium”, that is, humility conquers pride. This is the battle that has been fought out inside Caravaggio’s head between the two sides of the painter that are portrayed here.

For me the power of Caravaggio’s art is the power of truth, not least about ourselves. If we are ever to hope for redemption we have to begin with the recognition that in all of us the Goliath competes with the David.” 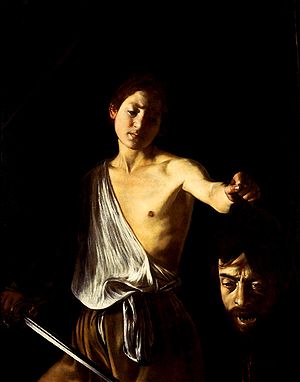